Ryan Hughes has built a career out of working with some of the most discerning homeowners in Tampa, Florida. Having established a reputation for creating exceptional outdoor living spaces, Hughes continues to set the bar higher and higher in the industry. We had the opportunity to catch up with him at the International Pool & Spa Expo in Dallas recently. During the course of our conversation, we got to learn a little bit more about his process for conceptualizing resort-style backyards for high-end custom homes.

Stepping into a thriving landscape design business, for Hughes, the pathway towards becoming an elite designer really began in earnest when he rebranded his family firm from The Hughes Group to Ryan Hughes Design / Build.

While widely known as an expert in the field of pool and landscape design, the award-winning designer is also a licensed pool builder holding a State of Florida Certified Pool Contractors License. Hughes explained that the rebranding process was an essential turning point that allowed him to reach the next level and connect with more affluent homeowners.

Designing Outdoor Living Environments For The 1%

“We create better lifestyles through innovative outdoor living,” said Hughes, when describing his firm’s mission statement. As the go-to designer for the elite 1% in Tampa, Hughes says creating a better experience for customers is paramount.

Hughes, who certainly didn’t start off building million-dollar backyards, says that it was a lengthy learning process to get to that point in his career. “In 2008, I got a chance to sit down and reflect on why I wasn’t connecting with the top 1%,” said Hughes, “I realized a few things, for one, I was focused on design and construction and I wasn’t focused on the client experience. I didn’t even know what that meant. I needed to educate myself on how the top 1% buy,” he explained.

“I also realized something even more important,” said Hughes, “and that is the (profit) margins. The margins I had prior to 2008 were from my father’s business or what I had learned from other folks in the industry. If you’re trying to do something exceptional you can’t mimic other people,” explained Hughes who said that it’s not enough to be able to sell to the 1%, you also have to be able to build these projects profitably. The second point is the more difficult aspect, which builders have a tendency to struggle with.

Scaling For Growth During The Pandemic

Like many in the industry, Ryan Hughes Design / Build has grown in the last two years in part due to the increased demand from consumers looking to enhance their backyard during the pandemic. With the virus curtailing travel and limiting the number of options on where to put those discretionary dollars, homeowners are reinvesting in their homes. Being confined to the home during this time put a renewed focus in the minds of consumers to create an outdoor living experience that the entire family could enjoy.

“The economy already started to heat up in 2017 so we were already preparing for some pretty big growth, we were ready for it, and then, of course, Covid hit and we got a little nervous,” said Hughes who recalled some hard discussions with his wife during the depths of the pandemic.

“We were discussing whether we wanted to expand or retract and we said ‘let’s keep going’ and started recruiting even faster than we were,” said Hughes, “Wow, did we time that right, because then all of a sudden things went the other direction with Covid and the demand has gone through the roof.”

Hughes, who is busier than ever says he currently has a two-year backlog to get through what he has already sold. “The leads are still coming in,” said Hughes, “we’re up to a six-month wait time so if someone signs a design contract, they’re waiting six months before we can even start the design.”

Like many, Hughes was impacted by the recent surge in price increases. During the pandemic, a perfect storm of factory closures, workforce cutbacks, logistical delays, and a deep freeze in Texas which took a large percentage of equipment out of circulation, helped set the stage for increases across the board. An explosion at the BioLab plant which is responsible for a large percentage of dry chlorine products sold in the U.S. contributed to increases from the chemical side as well.

“In the early parts of 2021 we were victim to price increases,” said Hughes, “we do fixed cost contracts with our clients so we had to honor them, but because I keep the margins high, I was able to do that. I didn’t have to go back to a single client and say that we were over budget and needed more money,” he explained. “There was probably around 6 months and 8 or 9 projects that we did for practice because the margins crushed us.”

“We’re doing some creative things now,” said Hughes, as he described how he is dealing with any further anticipated increases. “With every challenge, there is always an opportunity. One of the things my father taught me as he went through the inflation in the ’70’s, he said if inflation hits, buy inventory,” explained Hughes, “We bought a very large warehouse and I just talked to Jandy; we’re buying as many pumps and heaters as we can fit.”

In explaining the strategy against hedging against inflating prices, Hughes said, “If things keep going up in price, we may actually make money because we’re buying it at today’s prices. I think doing fixed cost pricing in this environment is risky, but we’ve somewhat mitigated that with what we’re doing.” 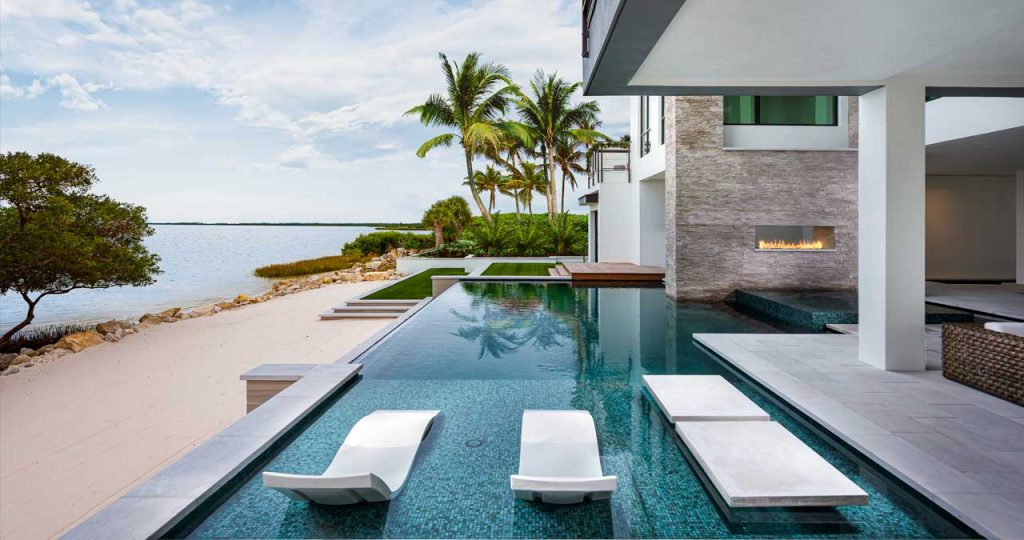 Figuring out what goes into an elite luxury pool & outdoor living environment means connecting with who the client is. Photo Credit: Jimi Smith Photography

As one of the foremost experts in his field, we asked him what the 1% want in their backyards. We wanted to know what features and design amenities are trending with high-end homeowners in the Tampa market. “It’s a tricky question,” said Hughes, “because we do things a little differently. We don’t go out to a client and interview them and ask them what they want. We try and find out who they are.”

The Secret To Satisfying Your Client: Over Deliver

“It’s about creating a world-class client experience and how do you do that? You over-deliver,” said Hughes. “If you don’t have the right margins, you can’t over-deliver. That is the number one lesson that I can share with builders who want to get into the multi-million dollar market.”

Hughes says that blowing away the client’s expectations is the secret sauce that has propelled him. He feels that this above all is the differentiating factor that has made him the designer of choice on so many high-end projects throughout his career.

Designing around the client’s lifestyle is what Ryan Hughes has become known for. Photo Credit: Joe Traina Photography

Connecting With The Clients Lifestyle

In trying to create that profile for the design process, Hughes stresses the importance of connecting with the client’s lifestyle. “We interview them to find out what kinds of things they like. Where do they eat dinner? Where do they travel? What kind of car do they own? What kind of wine do they drink? I ask them to describe in detail the kind of party they would throw.” said Hughes.

Custom Tailored Versus Off The Rack

For that exclusive 1% clientele, bringing in a high-caliber design firm to connect with their lifestyle is the equivalent of going in for a finely tailored custom suit rather than buying off the rack. Hughes says he places enormous emphasis on building that profile when planning an outdoor living project.

Telling The Customer What They Want

“We’re asking them who they are and then tell them what they want,” he explained, “No one comes to us and says ‘I’d like a vanishing edge pool with a side of fire bowls. They just don’t know and maybe what they’re asking for doesn’t even fit their lifestyle. We’re very in touch with the trends, but it is our job to tell them what is applicable for their project.”

“We try to figure out which elements contribute to that lifestyle component,” said Hughes, “if someone is looking for that over-the-top party environment, there’s going to be more fire, more color-changing LED lights. The acrylic windows may come into play, but it all depends on the client.”

“To make the backyard an experience, you have to create a feel that connects with the client.”

“A lot of people talk about architecture and art but what’s the end result, it’s about a feeling,” said Hughes, “When you go to a really cool restaurant, you don’t talk about the architecture. You say ‘wow, this atmosphere is amazing.’ The same thing holds true if you go to a boutique hotel and spend thousands of dollars a night on a room, it’s about the atmosphere and the vibe you get from the experience.” said Hughes. He indicated that those elements collected during the profiling stage often dictate what that vibe and feel will resemble in the overall design plan presented to the client.

Hitting all of the personalized notes that create a truly custom-tailored experience for the homeowner is a process Hughes is all too familiar with. He indicated that many builders approach the space planning around the pool which is the opposite approach he takes when planning an outdoor living space that caters to the customer’s lifestyle.

“We start with functionality,” said Hughes, “We don’t even really start with the swimming pool design. We start with the overall space planning and create the destinations. So we say we’re going to have a lounge area here, and a social firepit there. We’re going to add an outdoor kitchen and a dining scenario as well. We’re mapping that out before we even start to conceptualize what the pool is going to look like,” explained Hughes.

Expansion Into The Orlando Market

With a few new exciting projects coming out this year, Hughes is focused on expanding his footprint in Florida. “We recently expanded into the Orlando market and we have a couple of big lazy rivers over there. Our average lazy river is around 200 feet, this one we’re doing is 300 feet long. It has some really interesting water features and a cantilever pavilion that goes over the river. As you go through the river it’s got a water column that Crystal Fountains manufactured for us that’s going to put 500 gallons a minute of water down on you as you’re tubing through it. This one has amazing lighting, acrylic, and fire. It’s got everything that we’re known for but on steroids.”

That certainly isn’t the only high-end project Hughes has going in the Orlando market. “There is an indoor pool that we’re doing. It’s a 100-foot lap pool on the side of the house and adjacent to it is a Koi pond that runs the entire length separated by only by acrylic so you’re literally going to be swimming laps in the pool with the fish.”

The average price for one of Ryan Hughes’s builds has certainly gone up since he transitioned to focusing on the client experience. These days the size and scale of projects he works on have gone up in correlation with the prices he charges. “In ’08 we were at that 250-350k range, our average job cost now is around $1.5 million. Our projects in Orlando are $3-5 million residential projects. The size and scale have really gotten fun.”