CHIEF Secretary Farley Augustine told Tobagonians the deplorable, inhabitable and decaying conditions he found at the chief secretary’s official residence after he was elected in December caused him to spend over $200,000 in repairs to restore the house to a habitable and safe standard.

The residence is in Hampden, Lowlands, and was built in the early 1950s. In 2014 former chief secretary Orville London spent $5 million to have the space completely renovated and expanded. It was  renovated  again in 2017.

Augustine said he preferred to live at home, in a room on the ground floor of his father’s house in Speyside, than to live in the existing conditions as he responded to a question on the renovations at a fourth sitting of the assembly on Thursday.

He also said there was urine on furniture surfaces, missing fixtures and damaged lattice, balcony planks that made the space unsafe.

Augustine complained there were missing lights and a significant build-up of calcium and limestone found in the unmaintained pool. The entire restoration work cost the assembly $212,319.39.

Before assemblymen in the chamber and over 300 Tobagonians watching on Facebook live, Augustine showed photos of what he met at the residence and the repairs done. 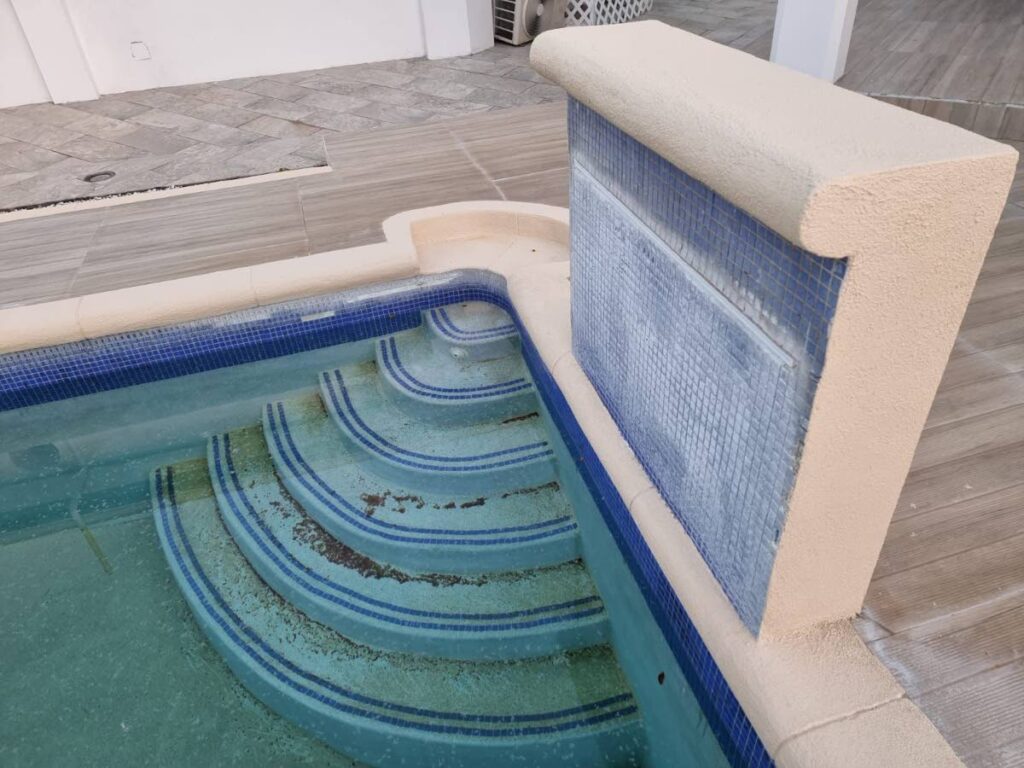 Pictures of an unmaintained pool presented to the Tobago House of Assembly Plenary Session on Thursday by Chief Secretary Farley Augustine. – THA

The first issue he raised was rust on the brackets holding up an awning and said he prayed it would not collapse on anyone, “especially my wife’s head, while we are there, because staff will have to compensate me for this.”

He said there was rust in the AC attached to the main quarters. “I can’t be in the cold breeze and those that work at the residence, with less salary than me, uncomfortable. We must have equity across the board.”

He said the rusted burglarproof gate leading to the master bedroom, which seemed to have been that way for over seven years, is a security concern.

In another photo, he showed missing chair legs and a damaged desk in the office. He said the fixtures in the bathtub were irreparable and the fittings had to be replaced.

Augustine said the beds in other rooms were repaired but the bed in the master bedroom was changed.

“These government quarters were not maintained properly,” he added. He said some of the  outstanding matters will take time as funds become available. 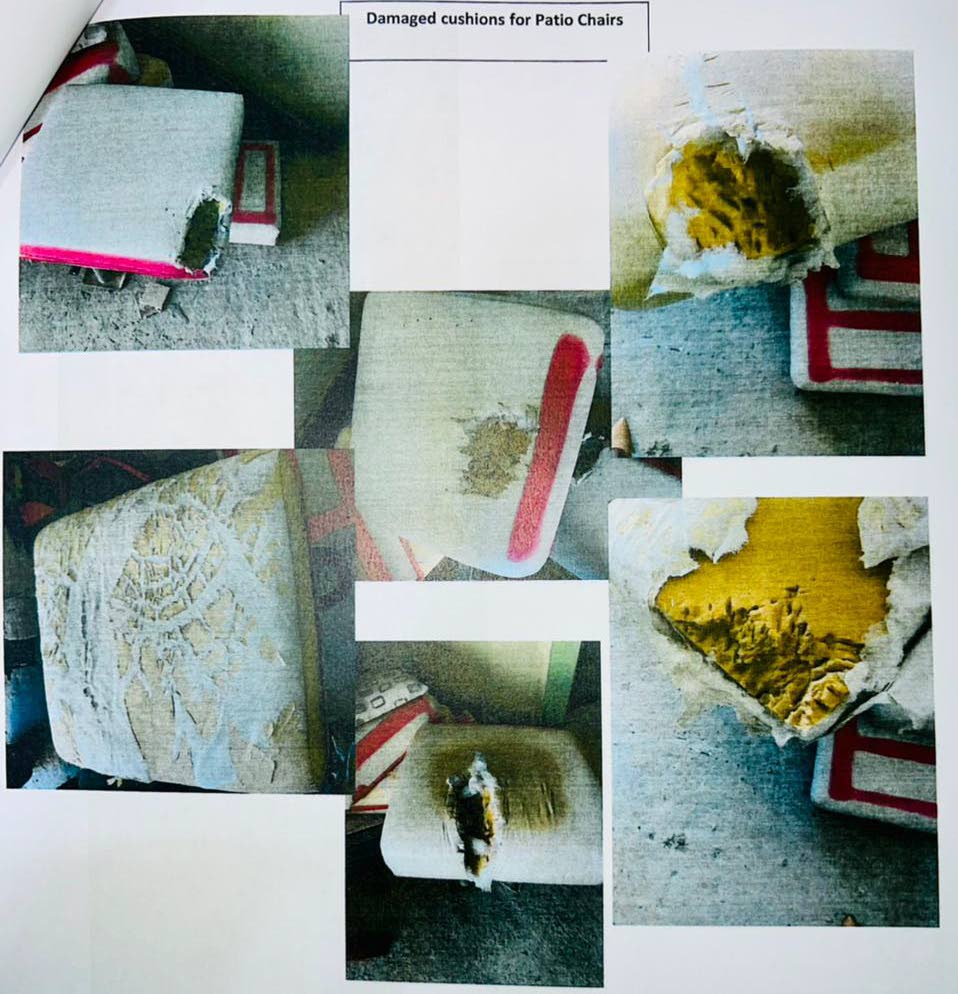 Pictures of damaged furniture presented to the Tobago House of Assembly Plenary Session on Thursday by Chief Secretary Farley Augustine. –

Augustine said the upholstery on most of the chairs was irreparable.

“I don’t know who was living here and what they were doing with the furniture but this was the state of what we met there. All busted up, sponge coming out of the chair, pee stains.”

Contacted for response on Thursday, immediate former chief secretary Ancil Dennis, who lived in the residence from August 2020 -December 2021, told Newsday it was irresponsible for Augustine to give Tobagonians the impression that Dennis had destroyed the residence.

He said he met the residence in a certain amount of disrepair but decided to make do, as his own stay was only expected to be temporary.

Dennis took over as chief secretary after his predecessor, Kelvin Charles, resigned before his term ended in April 2020. Dennis’ stay in the post was unexpectedly extended after THA elections in January 2021 resulted in a tie, which was broken after fresh elections were called in December 2021 after a 15-seat rearangement was established by the EBC. 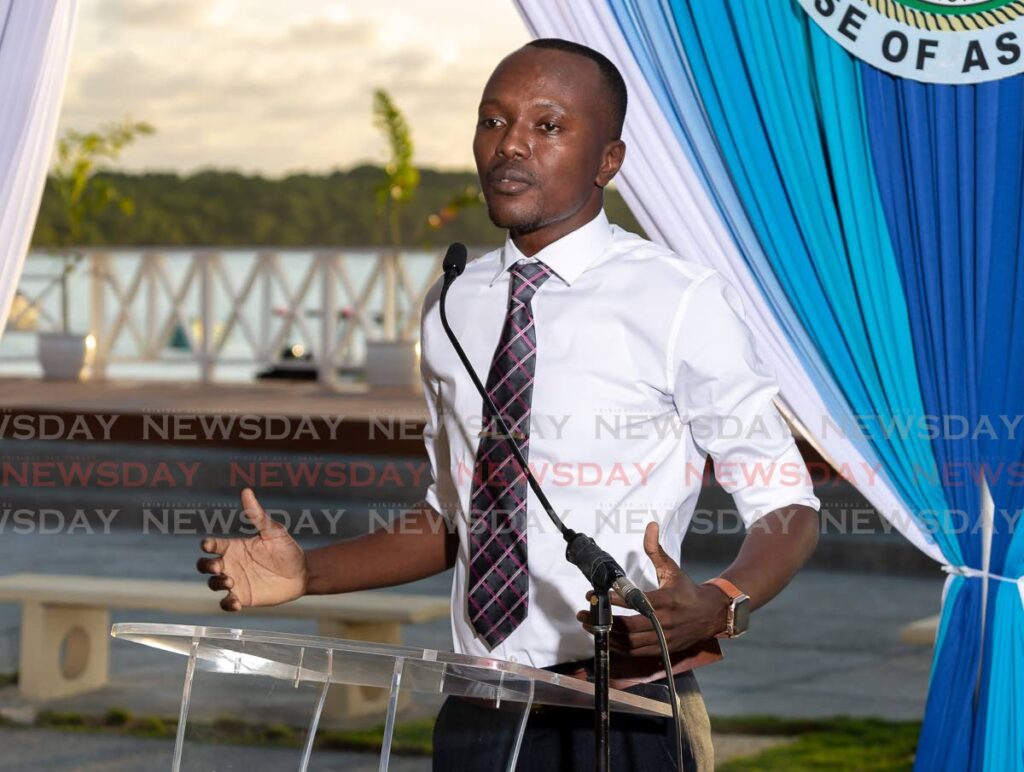 “The decision was taken to not replace the furniture before my occupation and also to not do any major renovation work. So I occupied the residence in basically the same state. And even without the replacement of those things. I was quite comfortable.”

Dennis did admit however, that his family’s dogs damaged a piece of furniture. He said he offered to pay for the repair before he demitted office.

He said Augustine exaggerated the situation.

“It is completely wrong and offensive to give the impression to the people of Tobago that I destroyed public property, because that is the impression out there now. And I will simply want to refute that, because it is absolutely far from the truth.”

Cost of repairs to THA Chief Secretary’s residence this year