Greece is renowned for its choice of gorgeous islands to visit. From the Caribbean-style waters of Lefkada to gorgeous Naxos, you’re spoilt for choice with over 200 inhabited islands to explore.

One of my favorites is the medieval Greek island of Rhodes. Not to be mistaken with Rhode Island in the United States, Rhodes is an island in the southeast Aegean Sea, very near the coast of Turkey. The Turkish port of Marmaris is only 25 nautical miles away, hence the island’s volatile and interesting Ottoman history.

Because Rhodes has an airport and receives numerous summer flights from many European destinations and has regular connections from Athens, it gets very busy in tourist season — especially as it has over 300 days of sunshine a year and many beautiful beaches to choose from.

Yet dig deeper and you’ll find Rhodes is also an island steeped in history, culture, nature, and wildlife, making it a perfect beach and culture destination just waiting to be discovered.

Let’s explore some of the spectacular reasons to visit this medieval Greek island.

Built in the 14th century by the Knights of St John, the medieval city of fortresses, gates, castle walls, and a huge dry moat with its labyrinthine cobbled alleyways was designated a UNESCO World Heritage Site in 1988. It has over 200 streets and alleyways, many with no names. As you meander around, it’s easy to see how invading pirates could get lost — it was designed for exactly this reason. Don’t be alarmed; getting lost in the Old Town is considered a rite of passage.

The Ottomans eventually conquered Rhodes in 1522 and defeated the Knights of St. John, who moved on to Malta. Travelers to Malta will no doubt see similarities in the design and architecture of Malta’s own fortresses and churches. The Ottomans maintained the Old Town, adapting it to accommodate their needs; minarets were built on top of churches, and many Greeks were made to give up their homes, were allowed only inside the Old Town walls for work purposes, and were made to leave at dusk.

The Italians took over in 1912, giving it a new lease of life. Visitors today will enter into an untouched piece of history.

For over 1,500 years, life has continued within, hence it’s considered to be one of the oldest “living” old towns in Europe. Over 6,000 people still live and work behind its walls with shops still trading, therefore daily life continues — evidenced by the washing hanging from windows or a Greek soap opera occasionally bursting from a TV.

Pro Tip: Wear sturdy sandals and if a little unsteady on your feet — bring a stick for walking the Old Town cobbled streets. A very pleasant walk is around the moat. There are plenty of places to stop and sit in the shade, but it can get hot, so bring water, a sunhat, and plenty of sunscreen.

2. You Can Stay In A Knight’s House

To really get a feel of what it’s like to stay in a part of history, base yourself in the lovingly renovated 14th-century knight’s residence — Kokkini Porta Rossa. Meaning “red door,” Kokkini certainly does have a red entrance, meaning you can’t miss its location: just inside the entrance gate of St John’s.

As soon as you step foot inside, a sense of peace will overwhelm you. Stone archways combine with soft lighting in each room and the living area, culminating in a warm, familiar atmosphere. The sun-dappled courtyard is the perfect place to unwind with a cold homemade hibiscus tea or something a little stronger in the evening. 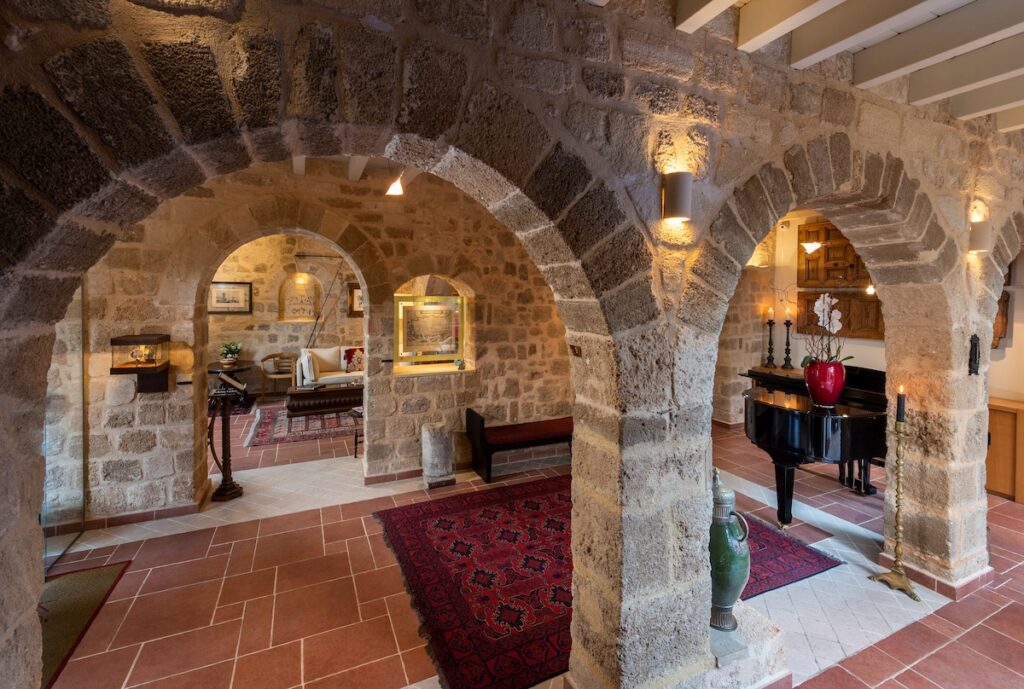 This knight’s house only has six suites — meaning it really is boutique, each suite named after the people who used to live and work in the house.

Pro Tip: Most taxis aren’t allowed within the walls of the Old Town, so you’ll be dropped off at the Gate entrance with a short, pleasant walk over the moat. Kokkini Porta Rossa can also arrange a taxi transfer with a company that is allowed inside when you first come to stay. 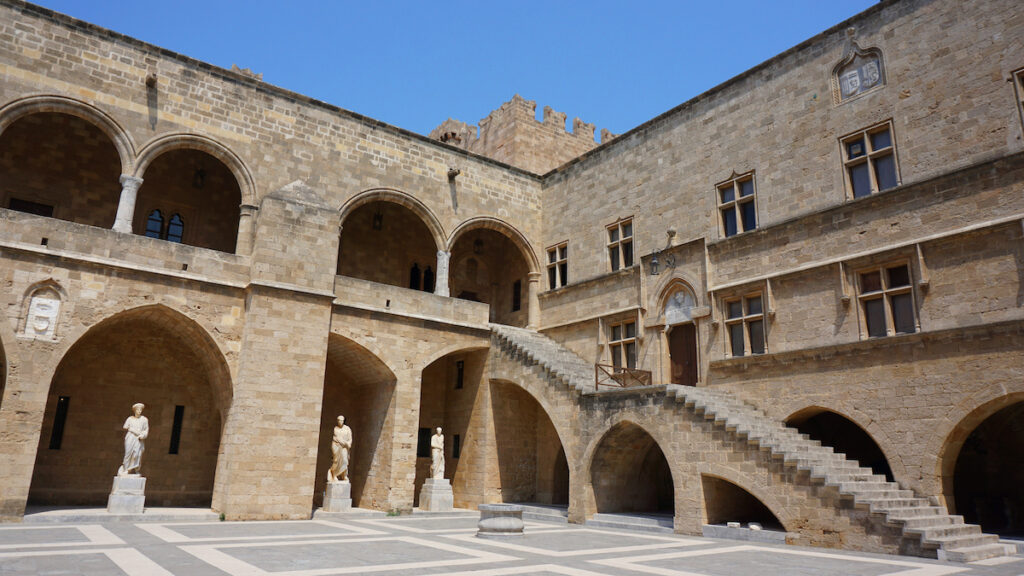 3. Beholding The Palace Of The Grand Master

The main spot to visit in the Old Town, this unique landmark is the pièce de résistance for your Old Town visit.

Built in Byzantine times and reconstructed by the Knights of St. John in the 14th century as a home for their Grand Master — it also served as an administrative center and fortress during the knights’ tenure.

Impossible to miss at every twist and turn of the Old Town streets, the Palace of the Grand Master is a museum where you can wander the large halls, dining room, and throne room (with massive fireplaces in each), plus the original private quarters of the Grand Master. It’s like stepping into the set of Game of Thrones. 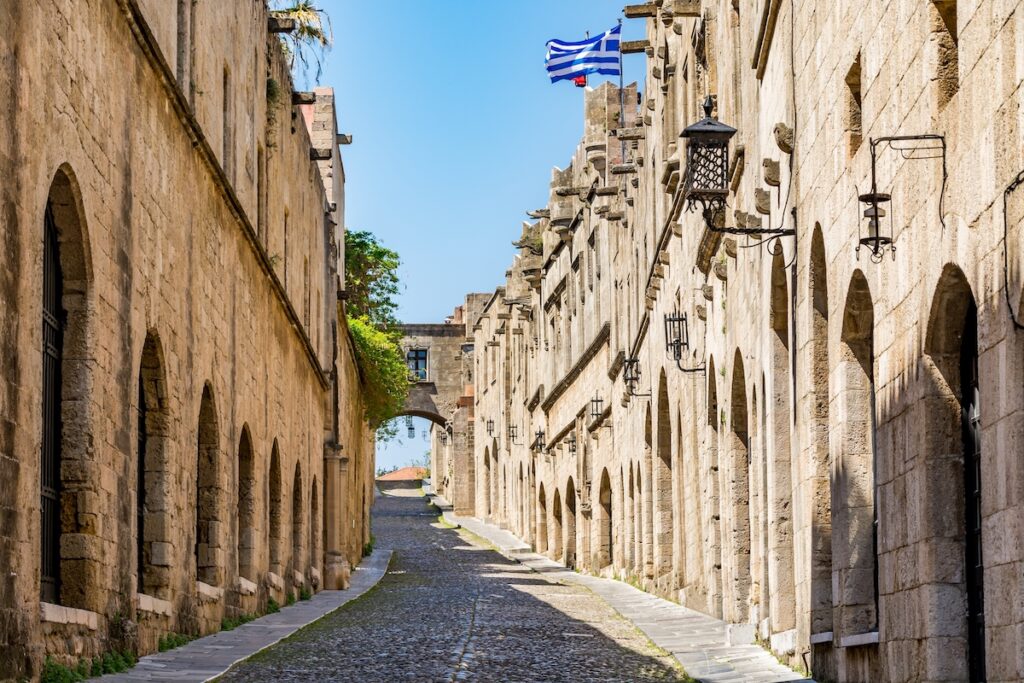 4. The Street Of The Knights Has Fascinating History And Architecture

Starting from the Port of Rhodes and finishing up at the Palace of the Grand Masters, you’re walking the 200-meter cobbled Street of the Knights. It’s called this because there are seven inns located on this street, built in the 16th century and representing the seven regions the knights originated from. Although most of the Grand Masters were French, the seven regions were England, Germany, Italy, Aragon, France, Auvergne, and Provence.

You’ll still see the seven, with four inns left completely intact. The front of each is decorated with emblems reflecting the respective country — the French one considered by many to be the most spectacular.

The stonemasons who painstakingly worked on these facades were mostly Greek, but some craftsmen were also brought in from Spain and France. Take time to walk up the Street of the Knights to admire the architecture and stonework — and have your camera ready. 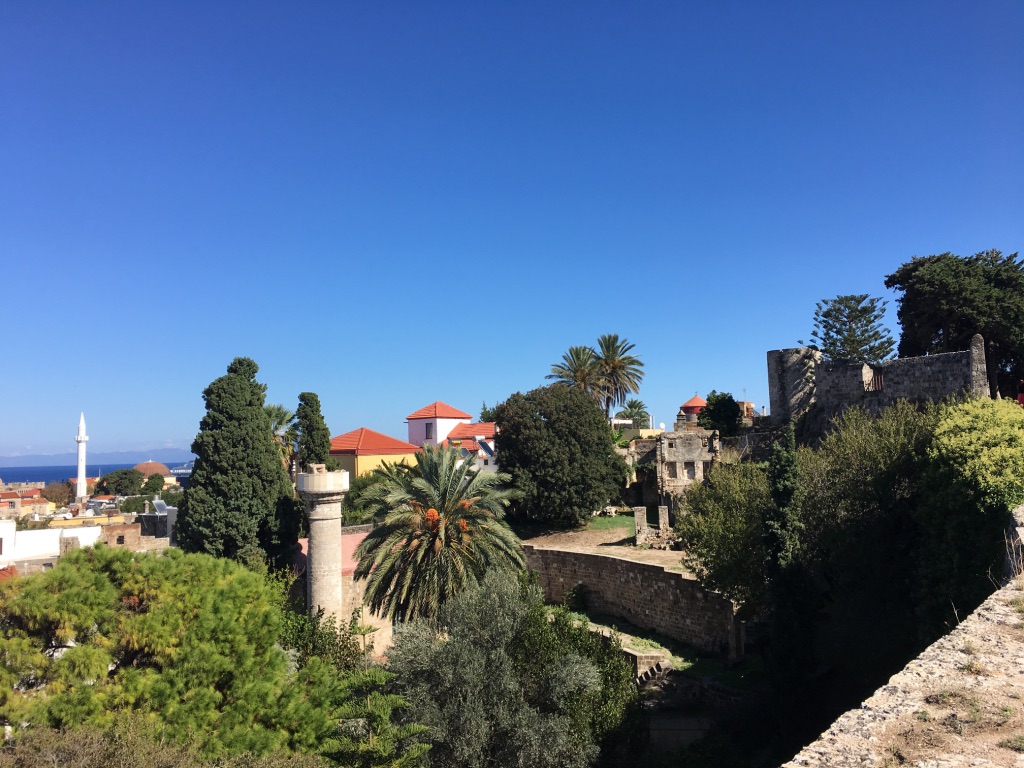 5. Adventurers Can Stoll Atop The Castle Walls

For a bird’s eye view of the Old Town, what better way than to walk atop the Castle Walls? You’ll gain a different vantage point of the ancient city and its colorful houses and minarets. No need to use your drone for a photograph here.

You enter the walls from the Palace of the Grand Masters and exit at the end, which happens to be right by Kokkini Porta Rossa Boutique Suites.

Pro Tip: As you exit and come back to street level there are very steep steps. And there’s no shade atop the walls, so wear a hat. It’s open usually from 10 a.m. to 3 p.m., so go earlier rather than in the heat of the day. The walk usually takes about an hour, though it depends on how long you stop to admire the views. 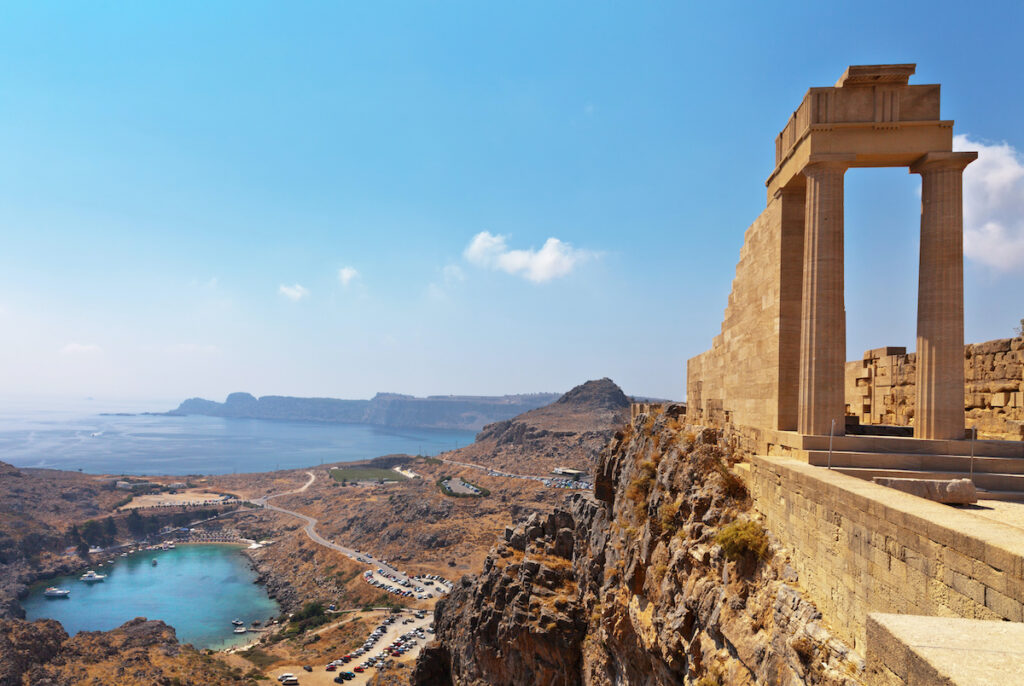 6. Rhodes Has Its Own Acropolis

Athens isn’t the only place in Greece to boast an acropolis. It may be the most famous in the world, but Rhodes has its own acropolis at Lindos in the southeast of the island, at St. Paul’s Bay. It’s only 31 miles away by car or taxi from Rhodes Old Town, roughly an hour’s drive away.

Lindos itself is now a fairly modern village and the Acropolis sits atop a 380-foot cliff overlooking the village with a magnificent coastal backdrop. You’ll find other historical monuments within the Acropolis such as the remains of temples from the 4th century B.C.

Pro Tip: To be rewarded with those sweeping views from the Acropolis, it requires a steep climb to the top. I prefer to view the actual Acropolis itself from the comfort of the beautiful cove of St. Paul’s Bay. With sunbeds and umbrellas, you can also choose from a range of tavernas and coffee bars and visit the picturesque chapel of St. Paul. Make sure to cover up if you wish to go inside. 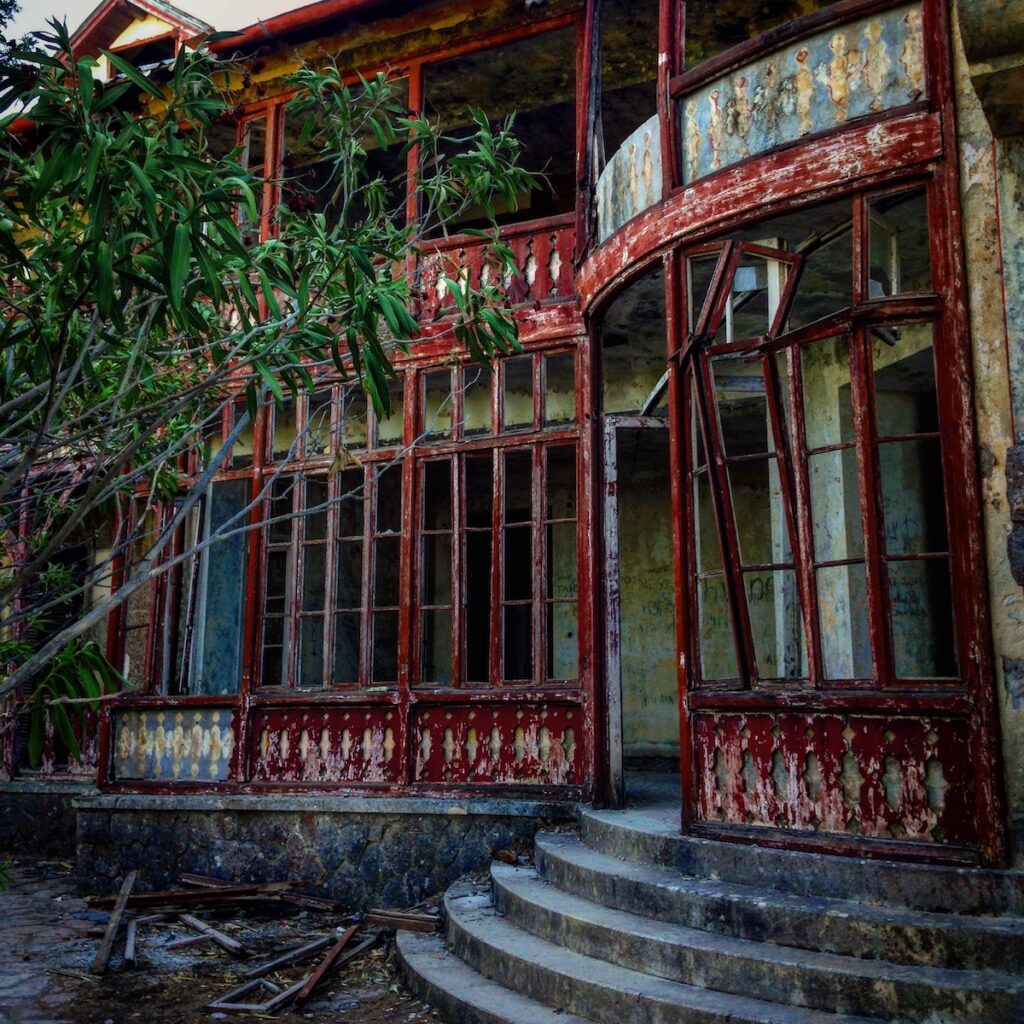 Heading inland 28 miles from the Old Town of Rhodes, it’s time to explore something a little different. Continue winding up through the pine forests and you’ll reach Mount (or Profitis) Ilias, a peak of approximately 2,618 feet in the center of the island.

Foxes and deer are known to roam these forests, but it’s the abandoned ruins that attract several tourists every year.

There are two chalet-style hotels here. Park outside and head off into the forest. Hidden amongst the trees with views all the way down to the coast is an abandoned two-story villa, originally the summer residence of the Italian Governor of Rhodes in World War II, between 1936 and 1940. It was intended, eventually, to be Mussolini’s retirement home before the Allies triumphed. Hence it fell into disrepair, and its ghostly shell is what you can see today. 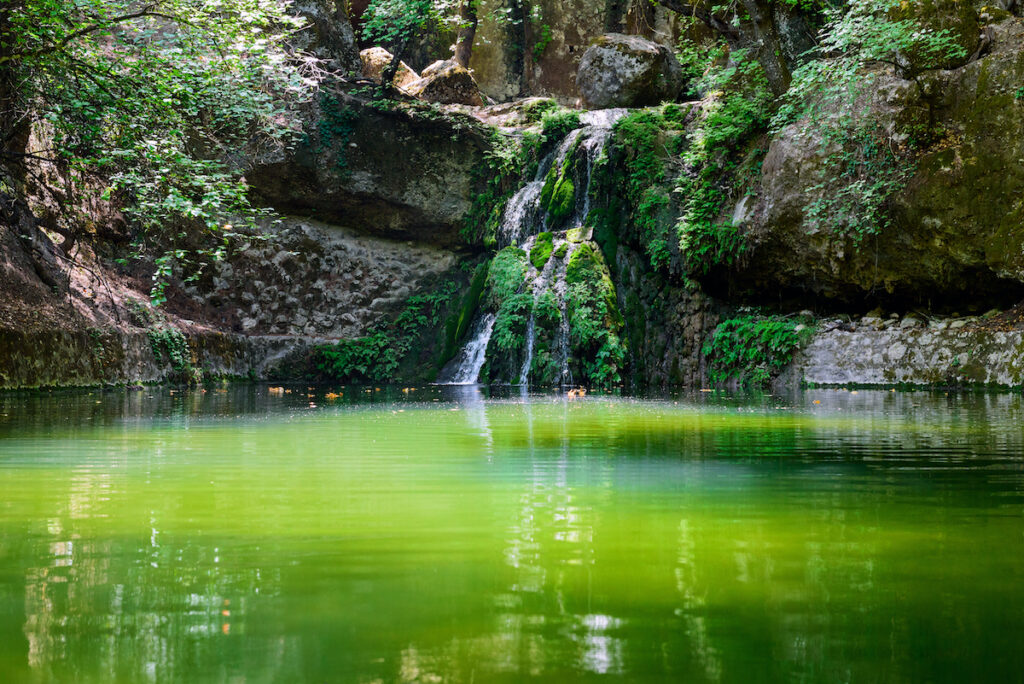 8. Butterfly Valley Is A Beautiful Escape

Continuing on with our nature exploration of the island, some 14 miles from Rhodes Old Town toward Lindos, you’ll find a turning to the “Valley of the Butterflies” — Petaloùdes in Greek. It’s a natural, protected oriental sweetgum tree park, and every year at the end of May, thousands of tiger moths gather to rest on the bark to conserve energy.  The result is the only forest of its type in Europe.

Visit this valley if you’re keen on walking through nature to view not only this unique phenomenon but also the huge rocks that rise up around the valley, lush vegetation, and a waterfall that ends up in a natural green swimming pool — it’s very chilly so be warned!

Any time of the year is good to visit Rhodes — but the spring and fall are best to avoid the tourist hordes. In September and October, the sea temperature is a balmy 79 degrees Fahrenheit, making swimming still possible at a less busy time of year. Enjoy your time on this medieval Greek Island.

For more on the Greek islands, take some time to browse these articles: