Skip to content
Home Pool Destinations These are the 20 closest national parks to Portland, Oregon

PORTLAND, Ore. (KOIN/Stacker.com) — With the COVID-19 pandemic still ongoing, many Americans are choosing vacations to outside destinations rather than inside. The national parks around the country have been popular destinations over the last two years.

Approximately 237 million people visited American national parks in 2020, representing a 28% year-over-year decrease attributed to the coronavirus pandemic. Many parks were forced to close to combat the spread of the virus. But when the parks were open, many of them saw record crowds as throngs of people desperate to safely enjoy nature descended onto parks when they reopened.

President Woodrow Wilson in 1916 signed the act creating the National Park Service to leave natural and historic phenomena “unimpaired for the enjoyment of future generations.” Since then, our national parks have welcomed visitors from around the world to experience some of the best the country has to offer and showcase the country’s natural beauty and cultural heritage. Today, the country’s 63 national parks contain at least 247 species of endangered or threatened plants and animals, more than 75,000 archaeological sites, and 18,000 miles of trails.

Stacker compiled a list of the closest national parks to Portland, Oregon. National parks are ranked by closest straight line distance, measured from representative points in Portland-Vancouver-Hillsboro, OR-WA Metro Area and each national park. Estimated driving times are from Here and are only available within the lower 48 states. All featured distances and driving times are estimated using representative locations from the center of each metro and national park—for some places within the metro area, the actual distance may be slightly shorter or longer to reach the closest entryway to a park.

Be sure to check with individual parks before you visit to find out about ongoing, pandemic-related safety precautions at www.nps.gov/coronavirus.

In this photo taken Tuesday, July 9, 2019, the Olympic Mountains are seen beyond a forest from Hurricane Ridge in the Olympic National Park, near Port Angeles, Wash. (AP Photo/Elaine Thompson) 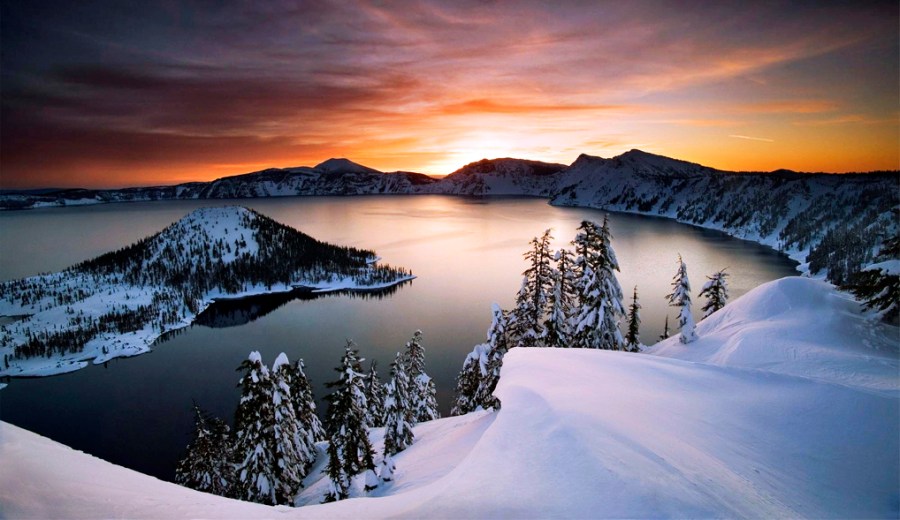 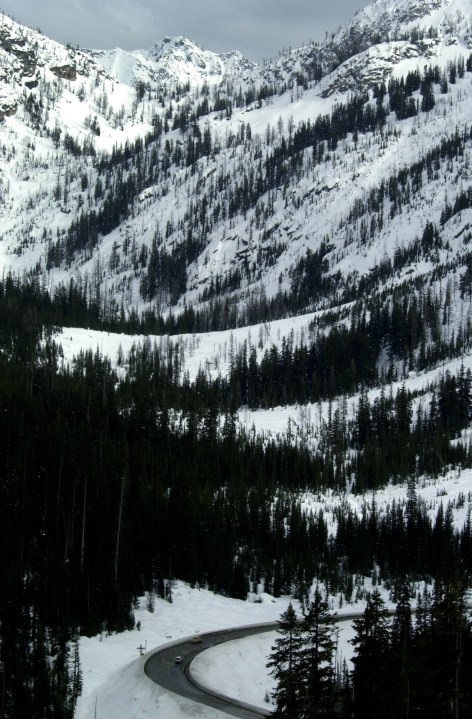 388423 14: The snow appears deep on Washington Pass, April 15, 2001, near the North Cascades National Park, WA, but the snowpack is low and scant rain is keeping the region’s hydroelectric plants scrambling to produce enough energy for their own state’s needs, leaving no extra electricity to bail California out of its energy crisis this summer. (Photo by David McNew/Newsmakers) 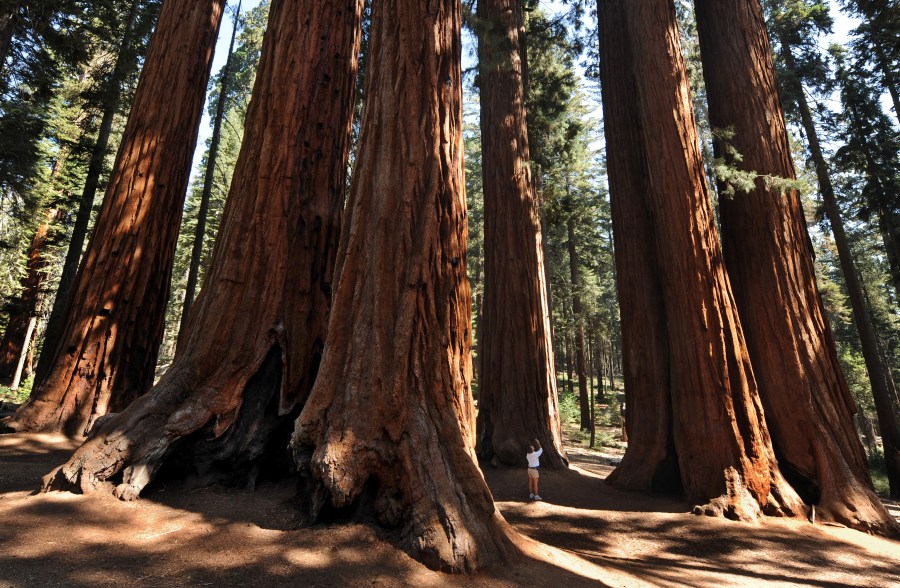 TO GO WITH AFP STORY BY UTE MEHNERT A woman stands amongst a grove of a Giant Sequoia trees in the Sequoia National Park in Central California on October 11, 2009. The Redwood trees which are native to California’s Sierra Nevada Mountains are the world’s largest by volume reaching heights of 274.9 feet (84.2 metres) and a ground level girth of 109 feet (33 metres). The oldest known Giant Sequoia based on it’s ring count is 3,500 years old. The Redwood trees can be used to capture CO2 emissions. AFP PHOTO/Mark RALSTON (Photo credit should read MARK RALSTON/AFP via Getty Images) 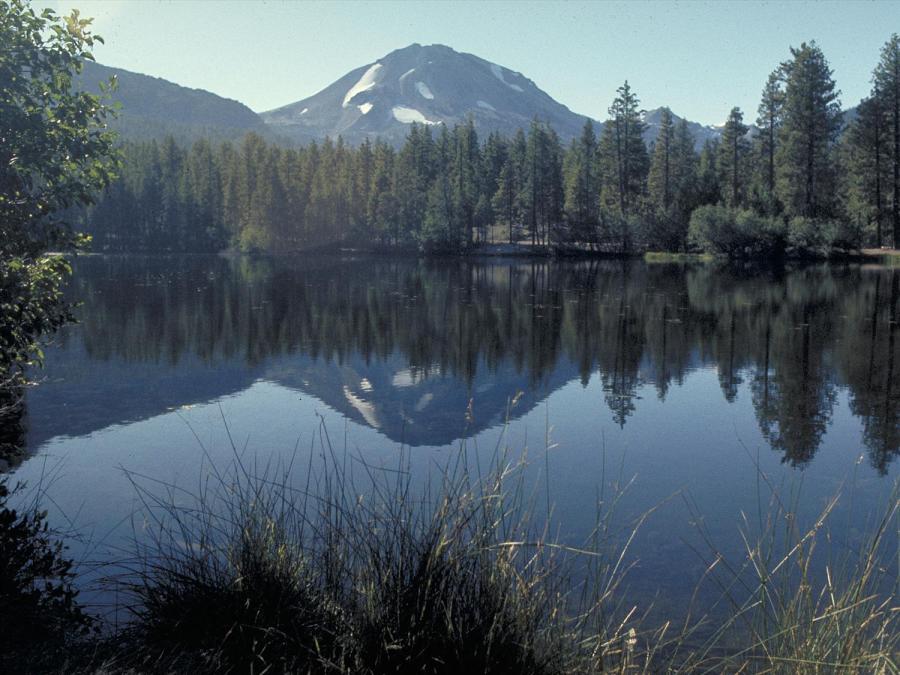 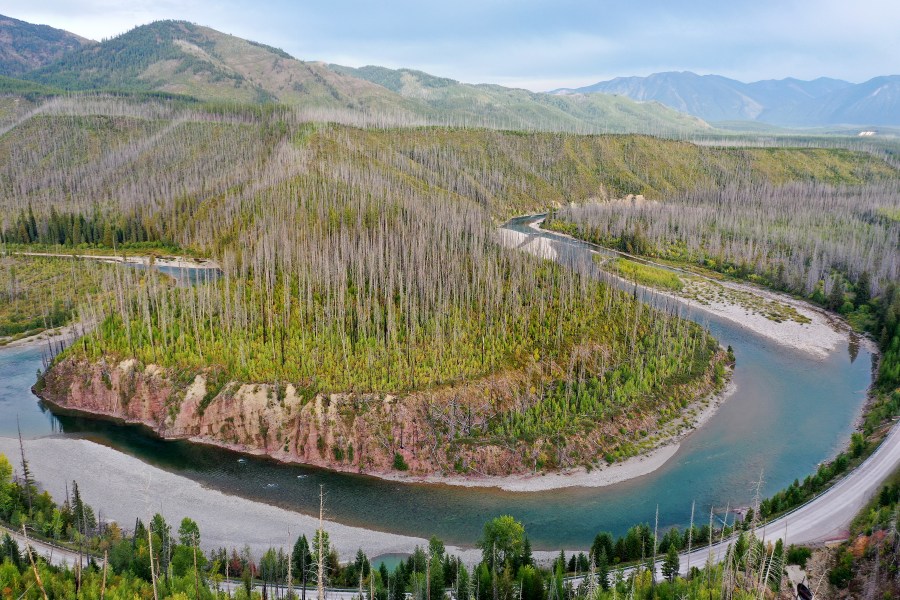 WEST GLACIER, MONTANA – SEPTEMBER 16: New pine trees grow up from the forest floor among the gray skeletons of trees killed by the 2003 Robert Complex fire that burned the mountain sides along the North Fork of the Flathead River on the western boundary of Glacier National Park September 16, 2019 near West Glacier, Montana. According to the 2017 Montana Climate Assessment, the annual average temperatures in the state has increased 2.5 degrees Fahrenheit since 1950 and is projected to increase by approximately 3.0 to 7.0 degrees by midcentury. As climate change makes summers hotter and drier in the Northern Rockies, the annual forest fire season has nearly tripled since the mid-1970s, from 49 to 135 days. (Photo by Chip Somodevilla/Getty Images) 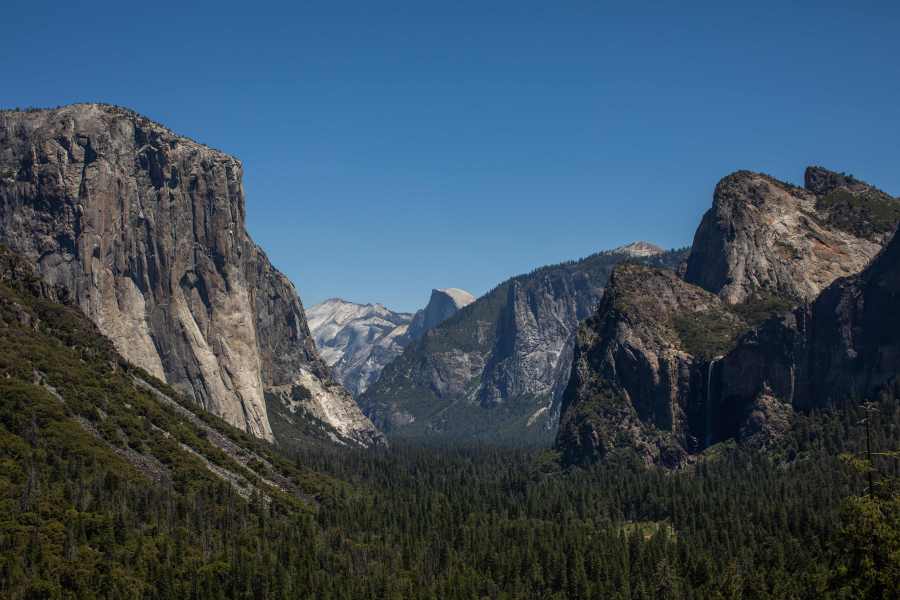 A view of Yosemite Valley from the Tunnel View lookout point in the Yosemite National Park, California on July 08, 2020. – After closing for 2½ months because of the coronavirus pandemic, the wildlife is taking over of areas used by the public. The park is open with limited services and facilities to those with day-use reservations, reservations for in-park lodging or camping, and wilderness or Half Dome permits. (Photo by Apu GOMES / AFP) (Photo by APU GOMES/AFP via Getty Images) 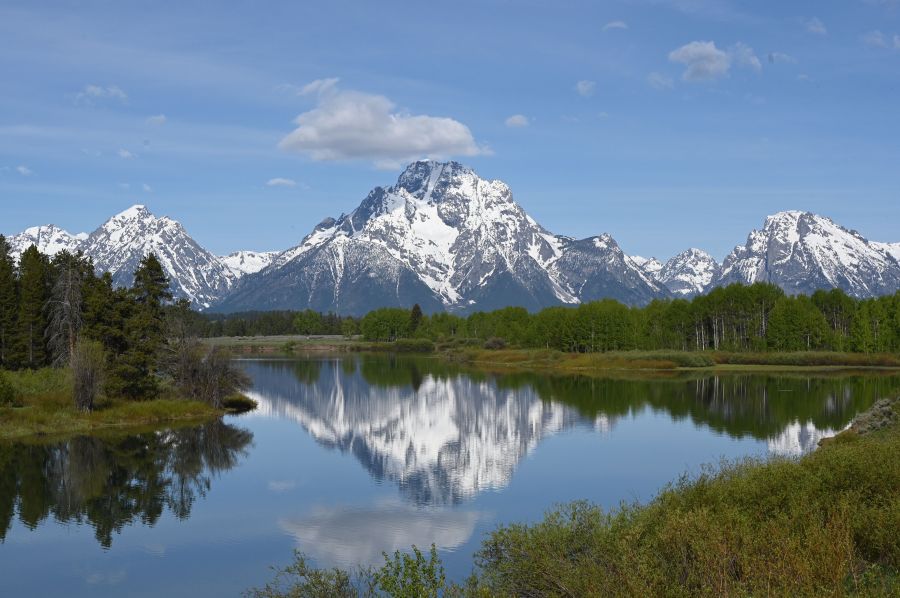 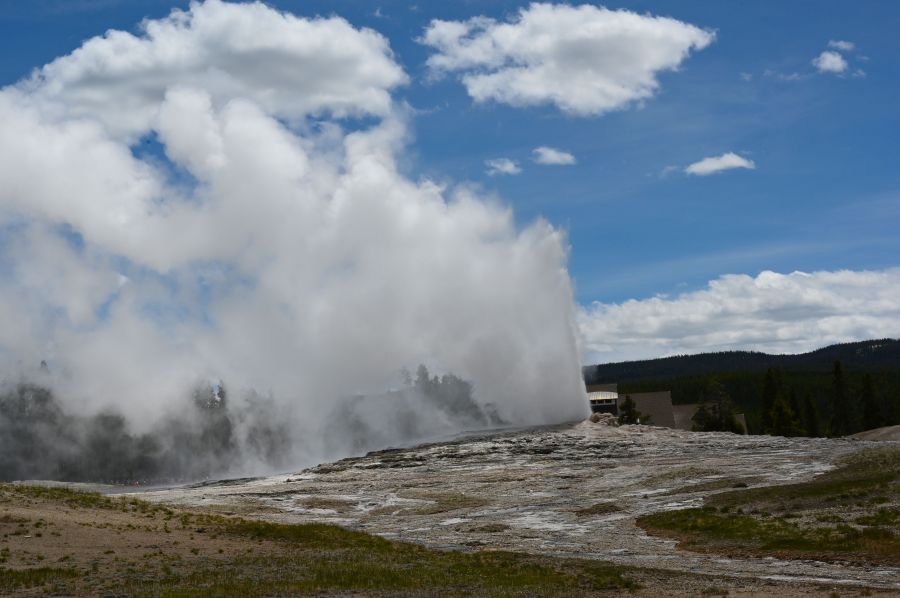 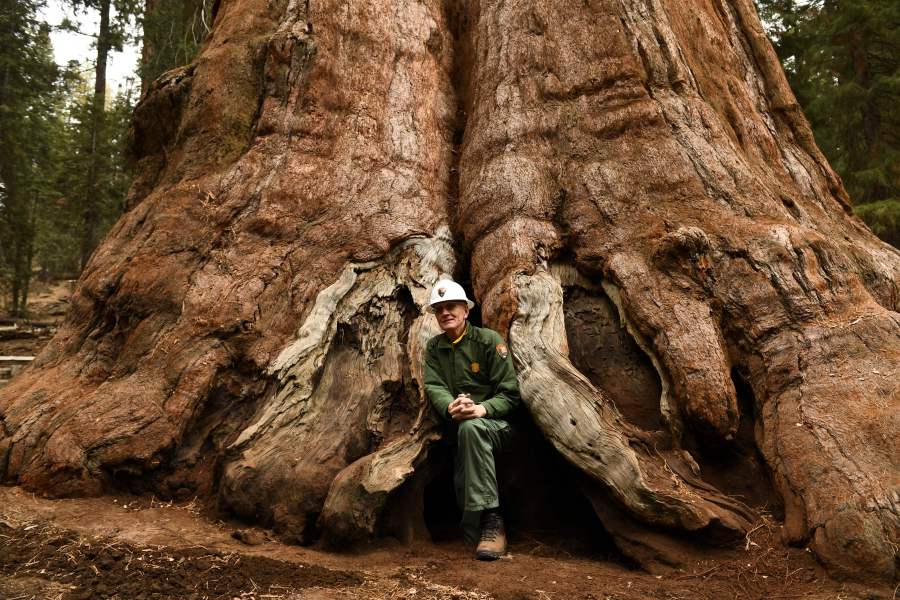 Sequoia and Kings Canyon National Park Superintendent Clay Jordan kneels for a photograph at the base of the tree after unwrapping the General Sherman giant sequoia tree during the KNP Complex Fire in Sequoia National Park near Three Rivers, California on October 22, 2021. (Photo by Patrick T. FALLON / AFP) (Photo by PATRICK T. FALLON/AFP via Getty Images) 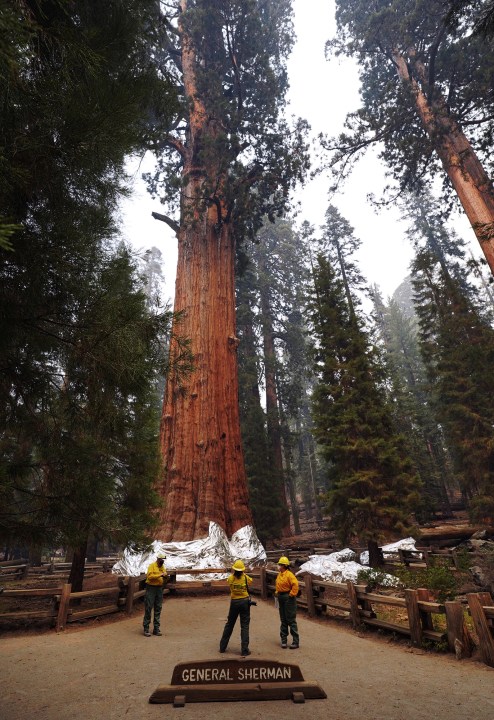 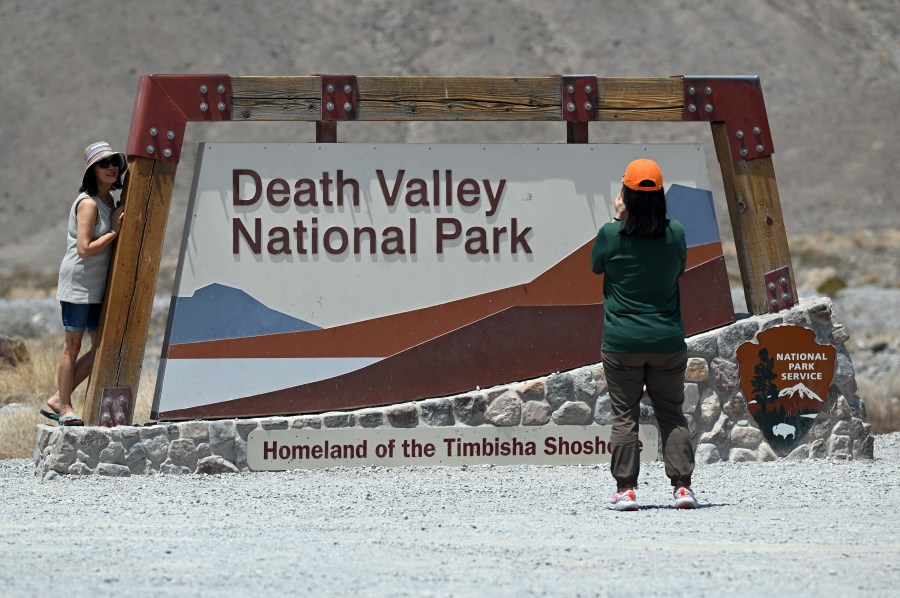 DEATH VALLEY NATIONAL PARK, CALIFORNIA – JULY 11: People pose for a photograph at the park entrance sign on July 11, 2021 in Death Valley National Park, California. An excessive heat warning was issued for much of the Southwest United States through Monday. Climate models almost unanimously predict that heat waves will become more intense and frequent as the planet continues to warm. (Photo by David Becker/Getty Images) 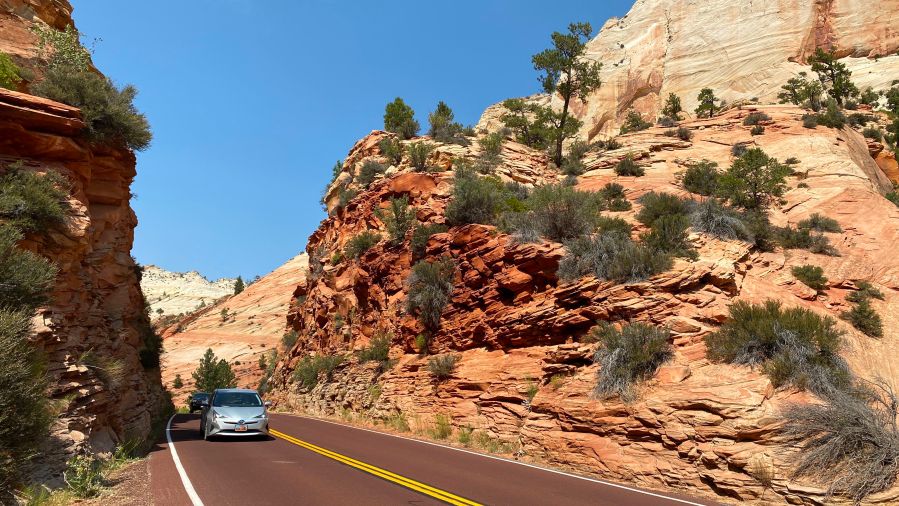 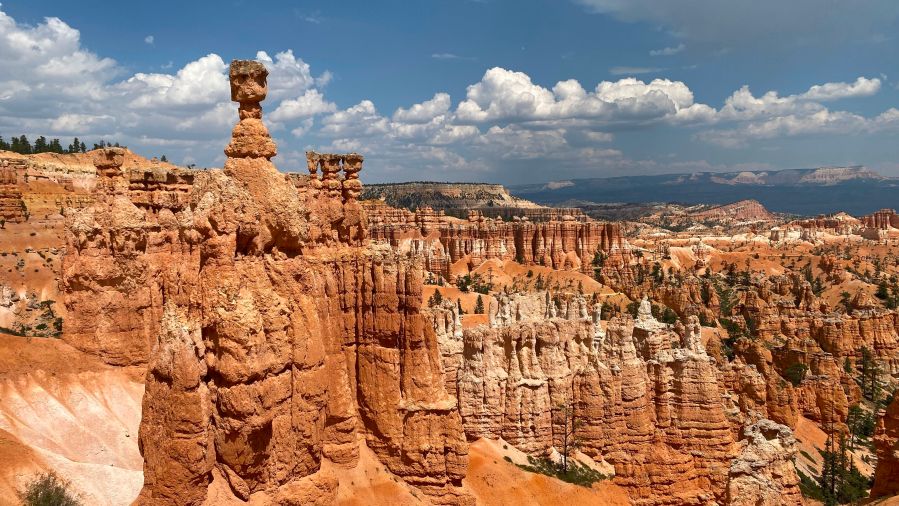 TOPSHOT – The Temple of Osiris, a rock formation, is seen in Bryce Canyon National Park in Utah on August 26, 2020. (Photo by Daniel SLIM / AFP) (Photo by DANIEL SLIM/AFP via Getty Images) 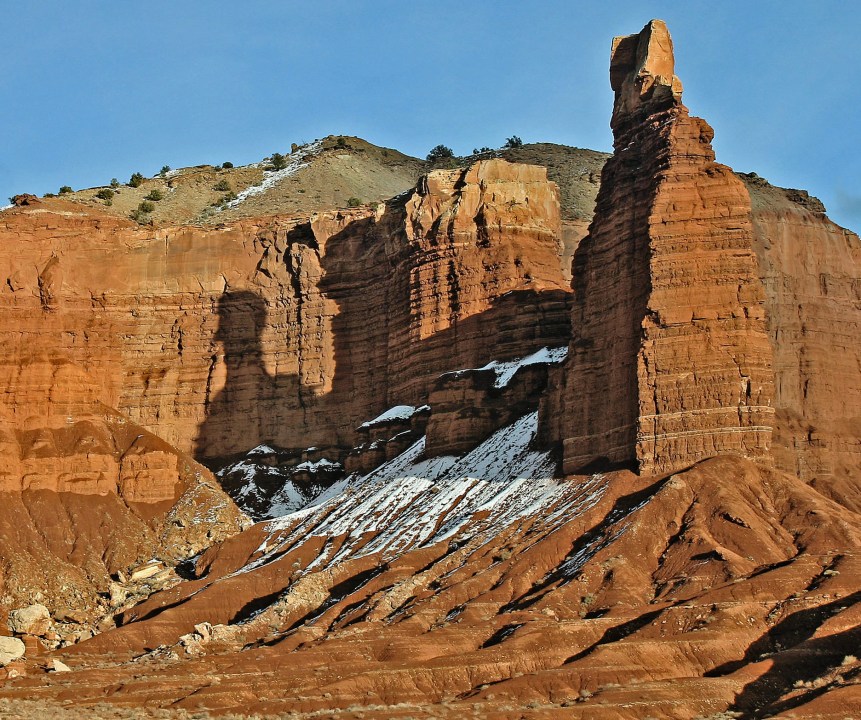 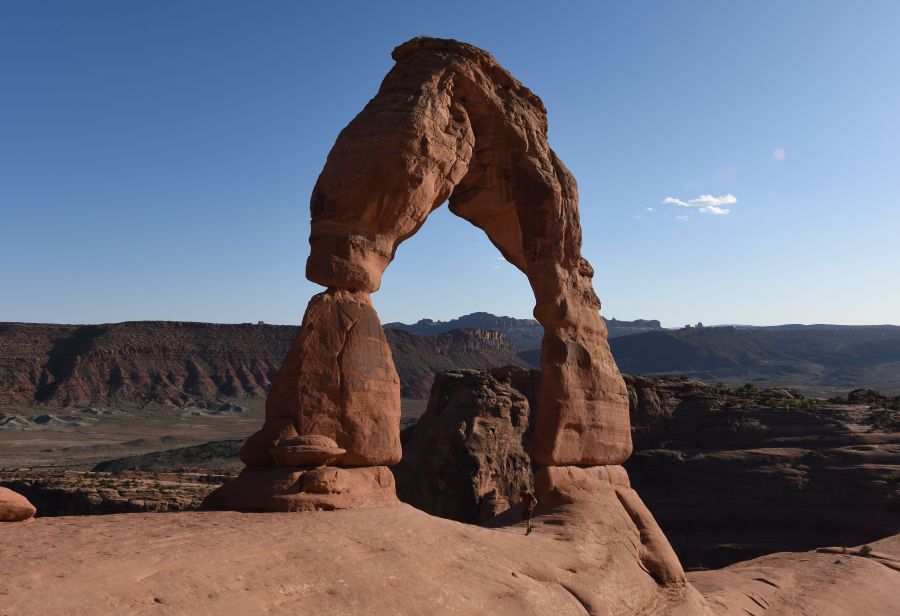 View of the Delicate Arch at sunset in the Arches National Park near Moab, Utah on April 21, 2018. – The park which has over 2000 arches that were formed over 100 million years by a combination of water, ice, extreme temperatures and underground salt movement. (Photo by Mark Ralston / AFP) (Photo credit should read MARK RALSTON/AFP via Getty Images) 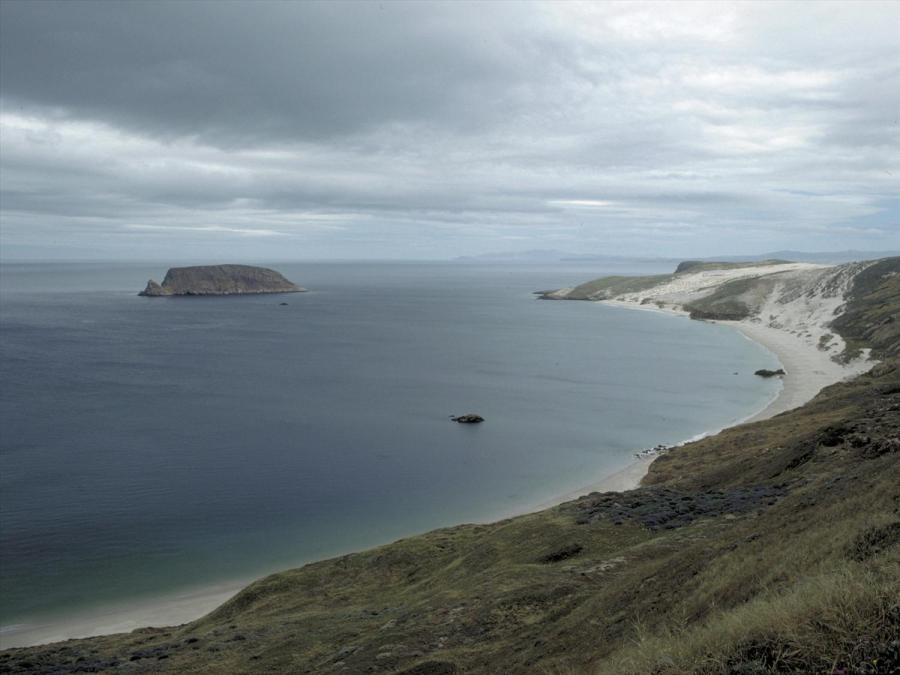 Editors note: This story was edited with data from Stacker.com.