When looking at luxury pools from around the country, we’re always looking for pools that break outside the paradigms of the norm. The pool we’re highlighting here is a perfect example that redefines what cajun comfort is supposed to feel like in Louisiana. Gone are the days of traditional brick coping and white plaster interiors. These days, sophisticated homeowners are definitely looking at something a little more high-end.

Brandon Miller is an award-winning designer from Breaux Bridge, LA that understands this shift in mentality. He has been slowly making a name for himself in the Louisiana market over the past decade and has his fingers firmly on the pulse of what the client wants. Coming from a family of pool builders, Miller was immersed in the world of pool construction from a young age. Following his uncle on various job sites, Miller picked up the trade early.

“I got in the field of installing fiberglass pools with my uncle,” said Miller, “I watched how he did things and shadowed him as a kid. As I got older, I was put in the role of doing things and during the summer months I’d be doing plumbing, installing, and so forth.”

After graduating high school, Miller went to work for his uncle full-time. He spent the next year of his life installing pools. At the same time a young man, he saw his peers making great money in the booming oil industry.

Ultimately, the recession ended and Miller would return to the pool industry once again in 2010. “My wife and I thought we should start our own pool company,” said Miller, “at the time, there wasn’t nearly as much competition as there is now. Seems like everybody is trying to be a pool builder these days, but back then there was only a handful. We contacted Leisure Pools which is the manufacturer that had been dealing with my uncle for years. At the time they didn’t have a permanent dealer in this area. Being that I had a relationship with my uncle, they opened their arms to me.”

However, it wouldn’t be that simple. On the tail-end of the worst economic crisis since the Depression, Louisiana would experience the Deepwater Horizon explosion which killed 11 people and released the worst oil spill in U.S. history. The impact to fisheries, tourism, real estate would have an economic impact in the billions. While technically in the pool business, making that first sale would prove to be a challenge during that time. “We had started this business but hadn’t sold our first project yet, so I went back in the oil fields and just used my captain’s license to try and make more money in preparation for that first sale.”

That first sale would inevitably come, and the rewards for persevering would be worth it. The homeowner wanted a fiberglass pool with a tanning ledge similar to a resort pool they had been to in Mexico. It was a unique challenge because back in 2011, fiberglass pool shell manufacturers didn’t really have as many tanning ledge models available. “I looked at the couple and said, ‘I think we can make it happen’. We went on to win the Masters with that project and the rest is history,” said Miller.

Flashback to this award-winning pool design that would be the first of many for Miller. Ten years to the day he finds himself delivering a second over-the-top pool experience for the same client.

The path to becoming an award-winning pool designer had taken years, but as Miller progressed into more high-end custom pools, he became a top builder of luxury gunite pools. These days he works with some of the most discerning homeowners in his local area. Miller has become an expert at helping homeowners envision and actualize their dreams of the ideal inground pool and outdoor living environment.

When a homeowner wants a luxury pool, quite frequently Miller is the one they turn to with their vision. “What I tell customers is, come to us with some ideas. We want to know the things that they like when they’re looking at pictures (online). Things like fire (features) or a tanning ledge. They may like a sunken seating area, but just come to us with a list of a few things that you like,” said Miller, who described his process with clients on establishing their list of must-haves for a resort-style pool.

When trying to price cost a luxury pool and outdoor living environment, much of that comes from identifying the size and type of pool being built. This is in conjunction with the features, amenities, and materials being requested by the client. 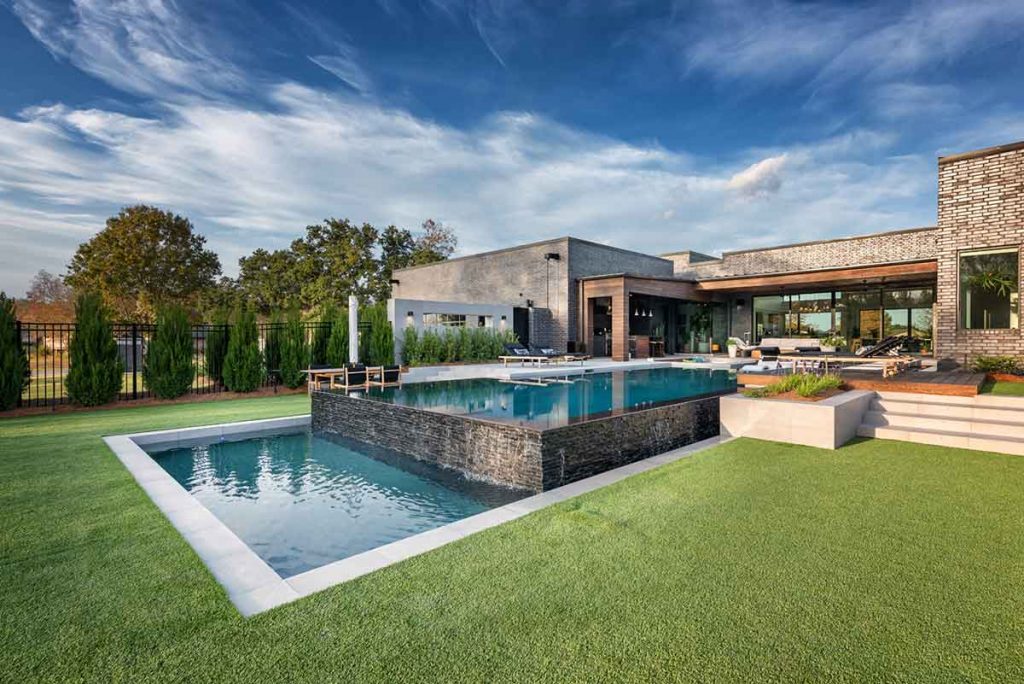 “There’s a list of the must-haves and a list of the wants. It’s easier to take away than it is to add on, so we’ll typically design something over the top and then we let their budget dictate what we do. It’s just easier I find than trying to upsell them.”

We asked Miller what features homeowners are requesting the most in a luxury pool these days. “Fire and water, without a doubt,” said Miller, “It’s what I’m being asked for over and over and over. Everybody wants fire and water. Whether it’s just a firepot or a firepot with water coming out of it, they want it. We actually just did a fountain with the fire feature in the water so the fire was burning on the water. Fire is definitely one of those must-haves for people.”

With a track record for building award-winning pools, Miller is no stranger to collaborating with some of the elite in the industry when it comes to satisfying his client’s goals for an over-the-top backyard. That clearly is the story here, with his latest project which is turning heads and helping set a new standard for luxury outdoor living in Louisiana.

“This project was actually a repeat customer,” said Miller, “ten years to the month from when we finished their last project we had started this one. We stayed in touch through the years. They said they were going to build another house and that we’d have the opportunity to build them something cool again.”

The homeowner gave Miller and his team free range to come up with a unique pool design that would wow them. The client had established they would be in their forever home and that they wanted something that truly catered to their lifestyle. 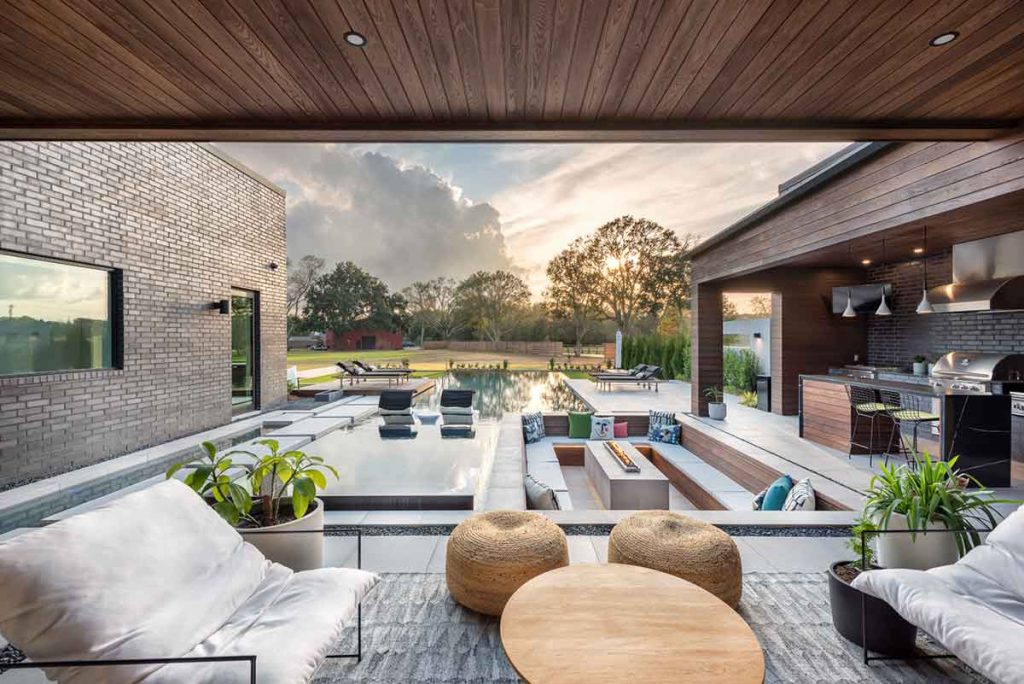 In planning this particular outdoor living project Miller reached out to the elite of the pool industry to consult.

“The first one was really an over-the-top project at the time. It had that huge fiberglass pool with the tanning ledge, so they really thought outside of the box on the first project,” said Miller, “the second project was just really taking it to another level to do something on the gunite side where the design is really free.”

Consulting With The Elite of the Pool Industry

“All of the decking is porcelain, we didn’t want anything traditional,” explained Miller, “we just took it a step further because we didn’t want any coping overhung. It was a real challenge with elevation changes. We had to get really creative with making sure water was going to shed away from the patio.”

Yards that look this way are atypical for Lousiana which has very flat topography. This would mean getting creative for the construction of the sunken seating area.”We were fortunate enough that the sunken seating area of the pool had enough fall from the house pad being built up high enough. We were able to get drainage out to it without having to have some kind of pump – it’s just gravity fed.” 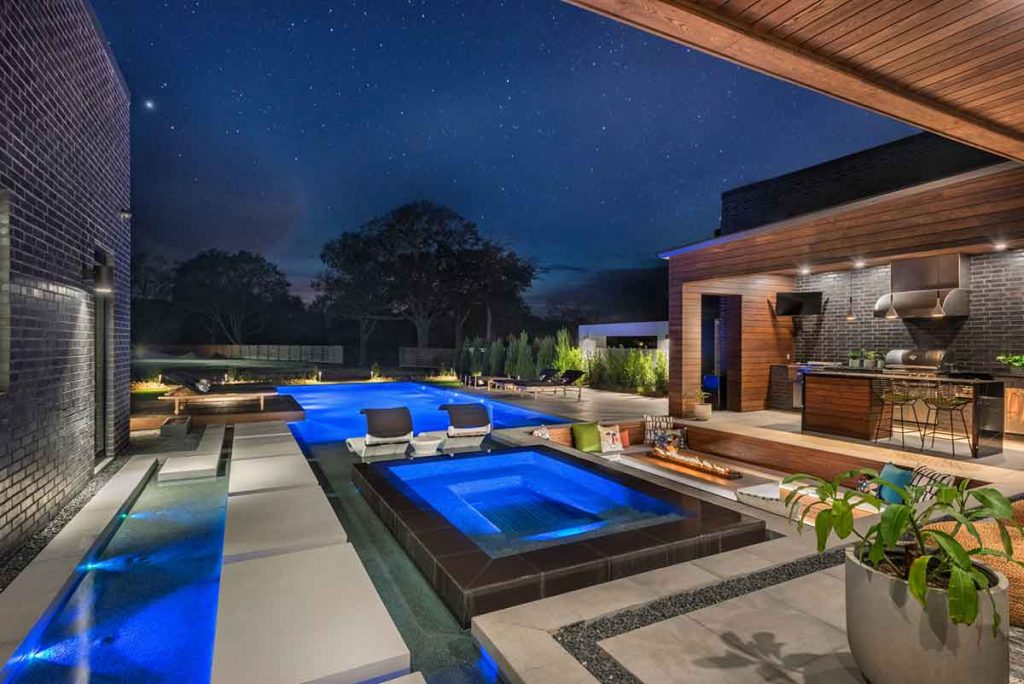 This unique luxury pool and spa design features a vanishing edge where the line of sight doesn’t allow you to view the catch basin from the house. – Photo Credit: Jimi Smith Photography

“On the design we have a vanishing edge wall. Once again, our yards are flat but were able to cut down some of the yard where if you’re in the house looking out at the pool area, the line of sight doesn’t let you see the catch basin,” said Miller.

It’s subtle nuances like this which are well-thought-out design elements demonstrating forethought into what the overall client experience would be. “On the walkway pedestals, we bounced around all kinds of ideas. “

“Keefe Duhon from Concrete Evolutions molded all of those concrete steps like a shoebox lid,” explained Miller, “it’s all one piece and mortared down so there are no grout joints or lines. There is an anti-slip texture on top of them so whenever they’re wet there’s grip to them. They really did a fantastic job.” 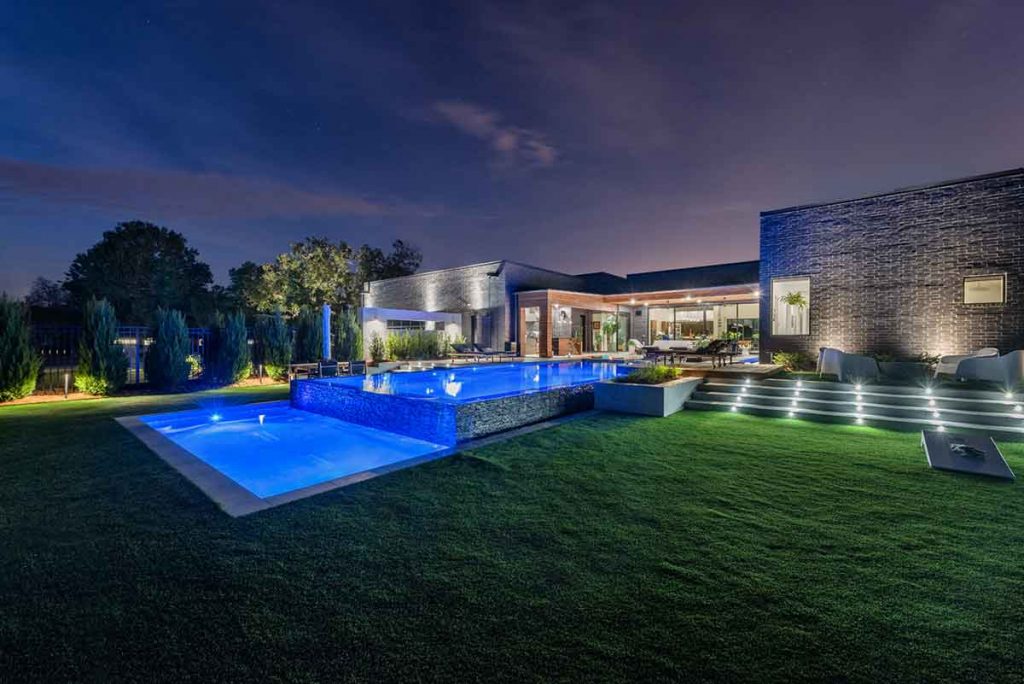 Convenience and reliability is a big factor on a project of this scale, as is ease of maintenance. “The equipment on the pool is completely Hayward,” said Miller, “there are multiple filters and pumps, heaters, and cooler units. The OmniLogic controller is really is user-friendly for them. As detailed as the project is, we had it programmed so that at a single push of a button on their phone it could do whatever they want.”

For the construction of the pool, Miller made the decision to bring in industry experts to help him achieve the functionality he was looking for in this custom build. “I follow a lot of the guys on Ask The Masters on social media and brought in Paolo Benedetti to do the hydraulics on the pool. It’s just spot on,” said Miller, “he and I spoke a few times, and first they did the construction drawing for us, and then we went to them for the hydraulics. It was just awesome to work with him.”

Benedetti of Aquatic Technology consults on high-end projects all over the world is one of the foremost respected experts in the pool industry. “Even though they were in California and I was in Louisiana it was easy, everything they provided was detailed where I never had to go back and ask questions.”

Having the right talent to design and build the project as well as the right budget are essential in delivering a truly custom-tailored backyard. “Our overall goal with this project, was to do something that hadn’t been done in the Lafayette market or hadn’t been done to that scale,” said Miller, “lucky for us, the clients were on board for all of that and made it really easy.”

Wanto learn more about this project? Listen to our entire interview with Brandon Miller of Cajun Pools & Spas on the Pool Magazine podcast.

Where to Dine & Stay during the Miami International Boat Show