Shortly before the pandemic, I had a prophetic studio visit with a sculptor who was holding a sale out of his workspace. I left with a fog machine, a strobe light, rainbow colored light bulbs, and some books of artist writings, one titled “Failure,” the other, “Appropriation.” I asked what the occasion was for the sale and he shrugged and replied, “I’m dematerializing my practice,” which I took as shorthand for pivoting to video — something many online magazines tried in 2015 and what most of us were forced to do in 2020.

New York-born, Los Angeles-based artist Tita Cicognani had worked mainly in sculpture and assemblage, an insistently material practice with funny invitations to the body, like a chair with a spiked seat titled “Bad Student” (2019) or a pink-lit installation of BDSM furniture, all covered in soft white shearling (“Fuzz Dungeon,” 2019). She didn’t want to dematerialize. Her 2020 video “I Am So Full of Longing and Desire It Gushes Out of My Knees as They Scrape the Ground Upon Which I Crawl Toward You” is almost a protest against the conditions of its own making. The title might give you a feel for the tone — CGI animations of a writhing figure with gray skin and a black bikini are cut with chaotically short clips from “The Notebook,” “Titanic,” Taylor Swift and Christina Aguilera videos, and various internet memes — a greatest hits montage of pop culture romance and Top 40 seduction. She also started making large installations combining her videos with sculptural elements and soundscapes around a central element: inflatable hot tubs. “There are three iterations of the tubs,” she says, “all very different.”

We’re sitting in her current installation, sturdy, non–inflatable, currently installed at the Hammer Museum, where she has agreed to an interview with me outside of normal museum hours, when visitors can sign up for a 45-minute slot to soak in “Heart Tub” (2022), which is exactly that: the schmaltzy stalwart of low-budget love nests that began to appear in places like the Poconos in the early 1970s, barreling America’s obsession with hysterical love into the Decade That Taste Forgot.

Artist Tita Cicognani stands against the hot tub that’s part of her new multimedia installation at the UCLA Hammer Museum.

Funny thing about the heart-shaped tub: what began as an overdetermined catalyst for romance has since devolved into a symbol of tackiness (see: “Failure”). But loving is nothing if not embarrassing, its expressions always a little infra dig. Cicognani’s “Heart Tub” installation doubles down on tackiness to the point of religious frenzy, a trance at the secular altar of desire. The tub isn’t just red, it’s red crocodile-skin vinyl (red crocodiles don’t even exist! Who comes up with this stuff!) pocked on all sides with embedded video screens and sitting under floating holograms of flying saucers and bubbly hearts plucked straight off a Lisa Frank Trapper Keeper.

“The first tub I made was during the first stage of COVID lockdown and it was in our temporary grad school studios in Chinatown,” she says. “It was certainly related to what I was feeling at the time — very isolated and very alienated. I was craving this type of physical interaction and sharing, this kind of” — she splashes a bit of water at me — “real physical space.” My notebook is wet. 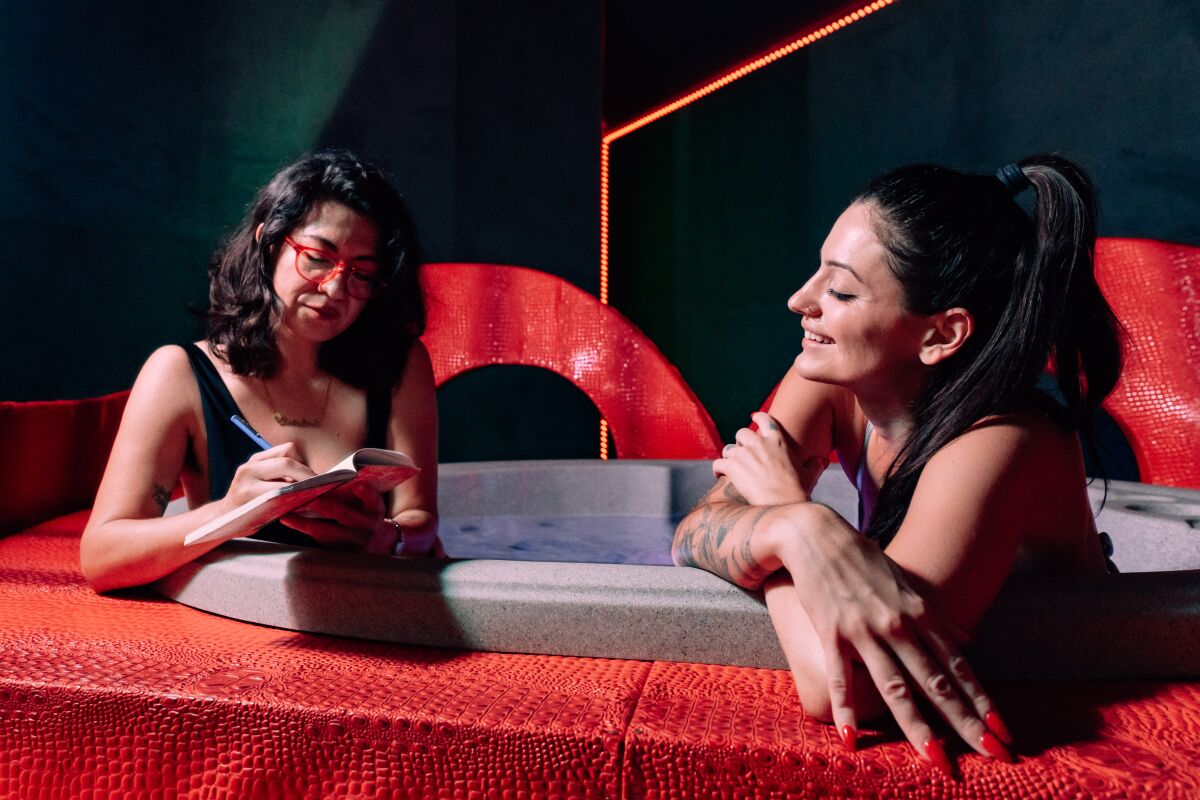 During the fall of 2020, while I was wrangling those rainbow lights and fog machines to try to jazz up the many livestream performances I was doing out of my apartment, Cicognani was using party-store special effects in combination with video projections and aforementioned tub to create what became “Mothership” (2021), a small, inflatable pool rimmed with mirrors and LED lights, and topped with a disco ball, like a tiny wet fun house. It’s vaguely redolent of the Gravitron — a county fair staple where I spent many a summer scooting myself upside down, pinned to its vinyl sides by centrifugal force. Physics is one of the few energetic thrills available to bored suburban kids who love Jesus too much to touch drugs or alcohol (but not, as it turns out, one another).

Cicognani’s work operates on a similar horseshoe of affect where religious and corporeal ecstasy get weirdly close. Her earlier projects include “Prayer Cards” (2019), taking on the look and feel of the small devotional pictures usually reserved for images of saints, and replacing them with an image of the artist herself in a state of stigmata, or sexy submission, or both. The cards are done up in a Smarties palette of pink and purple and teal, printed with the prayer of St. Francis of Assisi. The prayer sounds not entirely unlike the kind of soft-core self-help infographics that circulate on Instagram. “Oh, I’m not on social media,” Cicognani says. I’m not surprised. Her aesthetic often pulls from a generationally shared pool of pop references and the newly fashionable Catholicism and UFO culture, but her work never flattens into mere aesthetic. Cicognani is always trying to pull the body out of the screen. Like a benevolent Cronenberg. Artist Tita Cicognani sits in the hot tub she created.

Her second tub, “Grotto Tub” (2022), was even more carnal. Installed at the artist-run space Leroy’s, a gallery in the former Thanh Vi Restaurant in Chinatown that very much bears the architectural features of its previous life. “That was really wonderful because the space is also a bar. A lot of people were coming late at night with their friends and drinking in the tub. Opening night the space was flooded because there’d be like six, seven, eight people in there at a time. It was really wild and kind of gross, in a really nice way.” “Grotto Tub” looked more like a Madonna Inn rock shower and delighted in its earthiness. PVC pipes sticking out of its walls pumped a steady stream of unidentified brown goo. Accompanying videos contained footage of Cicognani and her friends mud wrestling. “There were less protocols in place there,” Cicognani admits. During her initial talks about bringing the project to the Hammer, Aram Moshayedi, the Robert Soros senior curator at the museum, affectionately referred to “Grotto Tub” as “art student soup.”

The current installation at the Hammer is an exercise in scaling up certain forms of intimacy attached to the tubs in their more clandestine forms. Realizing it here involved navigating new logistics like scheduled time slots, release forms and building codes. “Even this,” Cicognani says, motioning toward the chrome heart-shaped handrail that makes the installation ADA compliant. “That’s not something I thought of before, but it’s beautiful, it works.”

We sit back and watch the 40-minute video “I Still Believe” (2022) looping on a large screen against one wall. It’s like being at a drive-in, or rather, soak-in. The video follows a green-skinned CGI avatar of the artist with enlarged hands, traipsing around a cheap motel complete with its own heart-shaped tub. The low-res background image is taken straight from Booking.com (see: “Appropriation”). The figure falls through the water into an infinite underwater void, freaking out, emerging, encountering UFOs and immaculately conceiving an alien progeny. The figure toggles between astral heights and glowering depths, never quite able to sit still here, on the surface of the Earth, where Cicognani and I sit together, watching it all unfold. “My notions of desire and beauty and love were all kind of built on pop music and shiny things,” she says. “It’s something that I definitely rejected for a really long time and somehow in the past couple of years I’ve revisited and embraced it.” 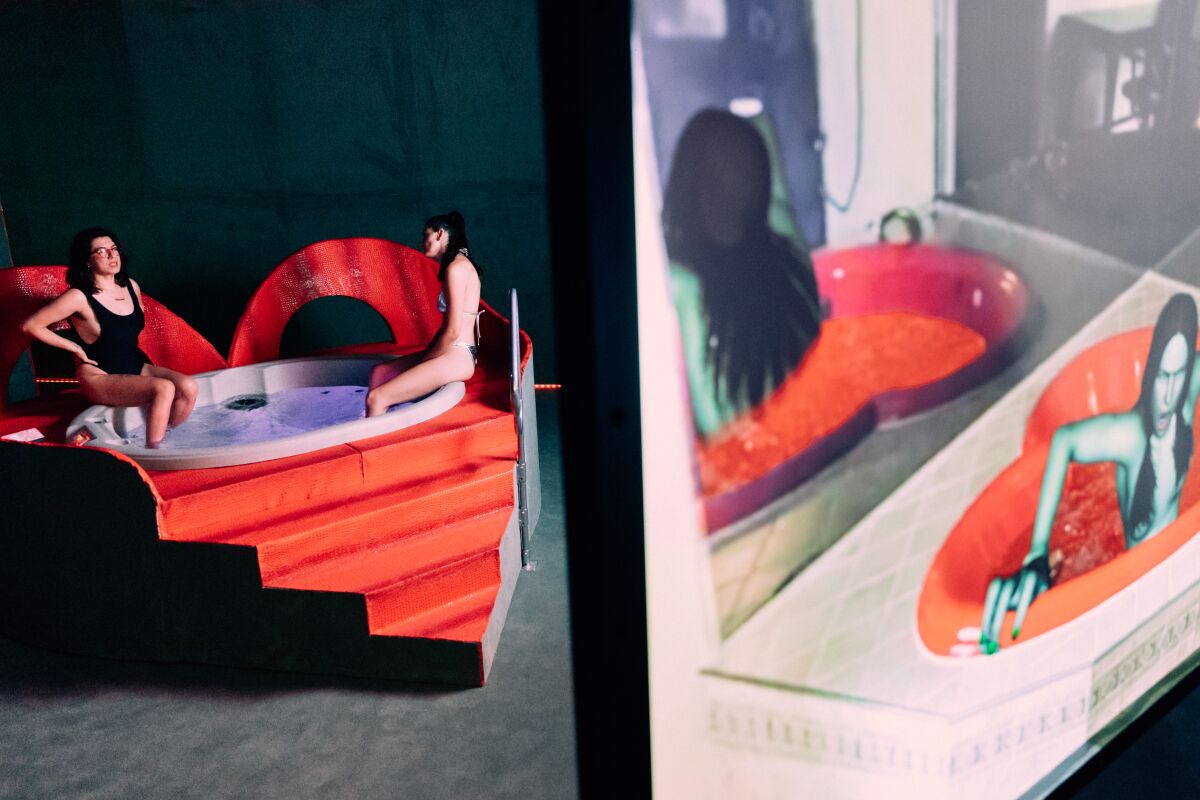 The contemporary art school is a curious institution — it’s kind of like a religion, though its orthodoxy is more cerebral than corporeal. “I had the feeling that all of that is very corny and I’m not like that. I’m very serious! That was my first year and a half of grad school: telling myself I needed to make work that I could relate always to theory, focusing on things that were interesting to me, but only on an intellectual level.”

There are intellectual levels here too. “Heart Tub” knows its place among other bodies of water in museums, most notably a work from the Museum of Contemporary Art’s 2010 exhibition “Suprasensorial: Experiments in Light, Color, and Space,” which included a 1973 pool installation by Brazilian artists Hélio Oiticica and Neville D’Almeida titled “CC4 Nocagions.” I was fortunate enough to take a dip in that work as well. My memory of it felt more slick and abstract, unlike the cascade of images that float in and around “Heart Tub.”

There is a potent class-dimension to exploring bibleots of desire marketed to an underclass in constant search of a disappearing middle. We talk about the economic subtext of a word like “tacky” and whether the 2010 film “Hot Tub Time Machine” is as valid a reference as the late theorist Lauren Berlant’s writings on desire. “When I started building the first one the voice of Craig Robinson saying, ‘it must be some kind of … hot tub time machine’ kept coming into my head,” she says. “It just made me laugh and was a reminder of the absurdity of the entire project.” We laugh.

As we dried off with the custom made towels Cicognani designed for the show, I regarded my own body. The pea-green towels are embroidered with an image of the baby alien from her video underneath the words “I still believe.” “Please, keep it!” Cicognani insisted. A representative of the museum offered to send me a fresh one. I declined, absolutely. I feel like it’s part of the work, I said, knowing that lots of people used this one. They assured me the towels are washed after each use.

Christina Catherine Martinez is a writer, actress, comedian and daughter of Los Angeles. She is a recipient of the Creative Capital/Andy Warhol Foundation Arts Writers Grant and has been named a Comedian You Should Know by both Time Out L.A. and New York magazine. Her book of essays, “Aesthetical Relations,” is available from Hesse Press. She was born and raised in Southern California. Visitors can make an appointment to sit in the hot tub Tita Cicognani created. Planning A New Pool? Here Is What You Need To Get Started A perfect guide to follow for your swimming pool installation