Australia is internationally renowned for its beaches and (dying) coral reefs, but, for those not fortunate enough to live by the sea, the public pool is an institution.

In my early 20s, I developed what would become a chronic back condition that kicked off with a bulging disc and a bout of back surgery. For the frustrating months I spent recovering, warm water hydrotherapy, saunas and spas were a major source of pain relief. I would visit my local pool at least three times a week, starting with gentle walking in the hydro pool amid aerobics enthusiasts, then graduating, eventually, to the lap pool. Since then, swimming laps has been a coveted routine in my life.

The public pool, like the corner store or local pub, is a community hub, a rare spot where families, retired, young couples and teens from different backgrounds and circumstances meet and play. Arising in the most unlikely of places – whether it be the middle of the Pilbra or the edge of the Murray River – the public pool is the holy grail of refreshment on a hot day, a space to gather, gossip and – for many – learn to swim. Icy-poles dripping on well-worn towels. Slabs of cement burning feet in the sun. The rich smell of chlorine lingering in your hair. What could be better?

Sneaking in at No 10, Vic Hayton memorial swimming pool may be humble, but it remains well worth a visit for the mere novelty of taking a dip in the middle of the Pilbra.

Set against palm trees and miles of red dirt, the aquatic facility is a green oasis in the middle of a dry, inland mining town.

For those hot Western Australia days, the pool has recently been equipped with colorful shade sails covering the babies pool and half of the main pools, and boasts a barbecue for warm summer evenings. It also punches above its weight with its water features, a volleyball park and half-court basketball area, making it a quintessential meeting place for locals and families. Tom Price is around a four-hour drive from the ocean, so you’ll be in need of a swim when you get there.

There are many features at the Launceston Leisure & Aquatic Center that make it stand out above its Tasmanian peers, but other than eight separate water spaces, highlights include a 65-metre water slide that winds atop treetops and two springboard diving boards, open during the summer season.

The outdoor waterslide is ticketed, but one ride will only set a thrill-seeker back $1. Unlimited recreation is $10 per person.

On weekends and during the school holidays, LAC also sets up “The Big Inflatable” at the end of the indoor 50-metre pool, which is, essentially, as described – a giant inflatable device.

Other than that, there’s multiple heated and accessible indoor and outdoor pools, a spa, an interactive water play area, a gym, a cafe and barbecue facilities. It’s fun for the whole family, all just minutes from the CBD. 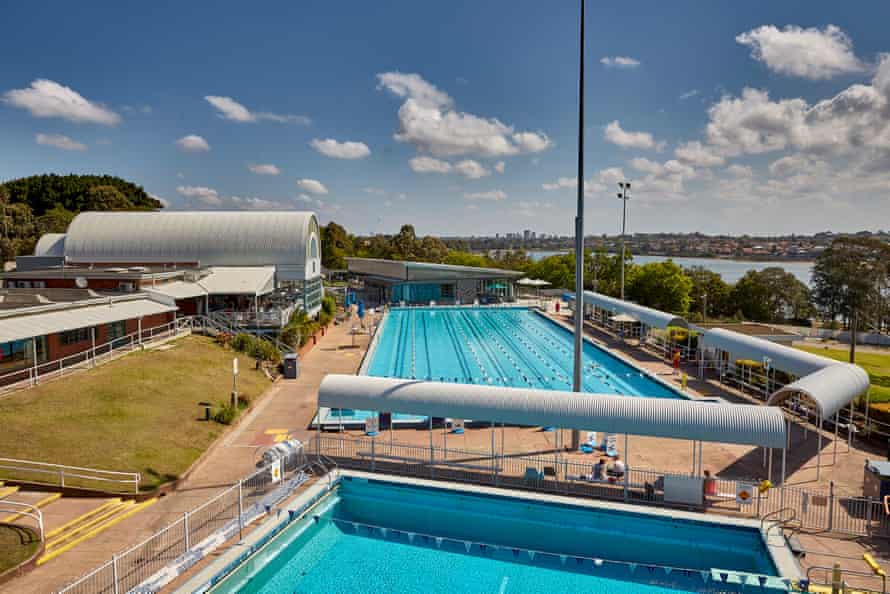 The Leichhardt pool and aquatic center is one of the few facilities in Sydney that still retains an iconic diving platform – featuring a salmon and baby blue staircase with various jumping platforms set against leafy gum trees.

Take your pick from an indoor or outdoor heated pool, hydrotherapy pool, children’s pool, a dive pool or an outdoor mushroom pool, designed to be a children’s aquatic playground. There’s also a fitness centre, cafe and free parking next to Leichhardt Oval.

The facility and surrounding gardens have beautiful views of the water across the upper harbor – bring a book to enjoy on the grass after a dip, and enjoy expansive views of the bay.

Ocean pools get a lot of press, but the humble lake pool deserves just as much celebration.

Lake Mulwala swimming pool straddles the border between Victoria and New South Wales, at the tip of the Yarrawonga foreshore. Instead of saltwater, the Olympic-sized pool is filled with fresh water from the Murray River, allowing for lap swimming away from tree stumps.

A prime spot for pelican spotting, come for the pool and stay for the lake foreshore, where packed with picnic spots, a kids playground and a water slide. On the water, canoes, tubes, water skis and barbecue pontoons can also be hired for daredevils – or those looking to settle in for the day. The local pub is just meters away on the corner of Inglis and Melbourne streets. 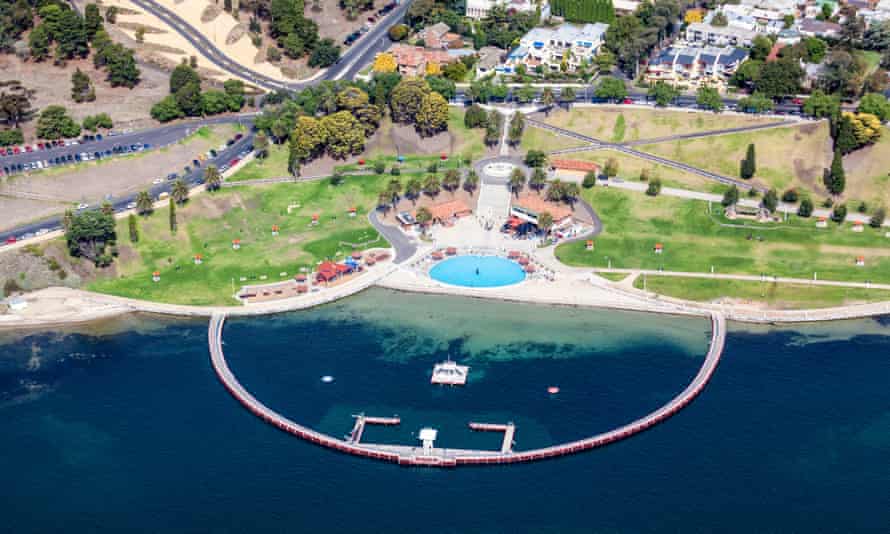 When Eastern Beach Reserve was built in the 1930s, it was often referred to as “the people’s playground”. Today, the Geelong waterfront has been revamped from the decayed promenade it once was but the sea bath of old remains the same.

This pool is a lovely spot to visit when the sun is shining or en route to the Great Ocean Road. The shark-proof swimming enclosure is the main event, but families could pass hours exploring the reserve’s various floating islands, playgrounds and children’s pools set against the historical art deco boardwalk. And thrill seekers can have a go at the large diving tower, with expansive views of Corio Bay.

Stay for the day and have a picnic at one of the barbecue facilities, or bring your dog along for some aquatic fun (though they’re required to remain on a leash). 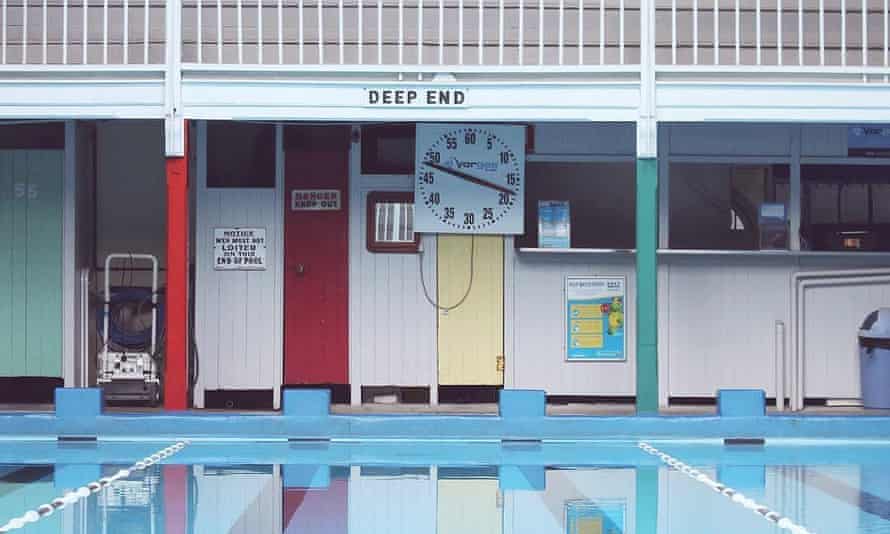 Spring Hill Baths is well worth a visit for the history alone. The oldest surviving swimming baths in the southern hemisphere, it’s Brisbane’s first in-ground pool and a heritage listed site.

Designed by Thomas Kirk, Spring Hill Baths was built from 1886 to 1913 and still retains its classic brightly colored changing rooms and grandstand seating with stepped wooden bleachers. Its old word charm is retained down to signage, with black lettering warning “spitting and smoking strictly prohibited”.

Perfect for winter bathing, the baths offers a 23-metre indoor heated pool, a kiosk (including espresso machine) and aqua aerobics. Check out the original Spring Hill cottages on your way out. 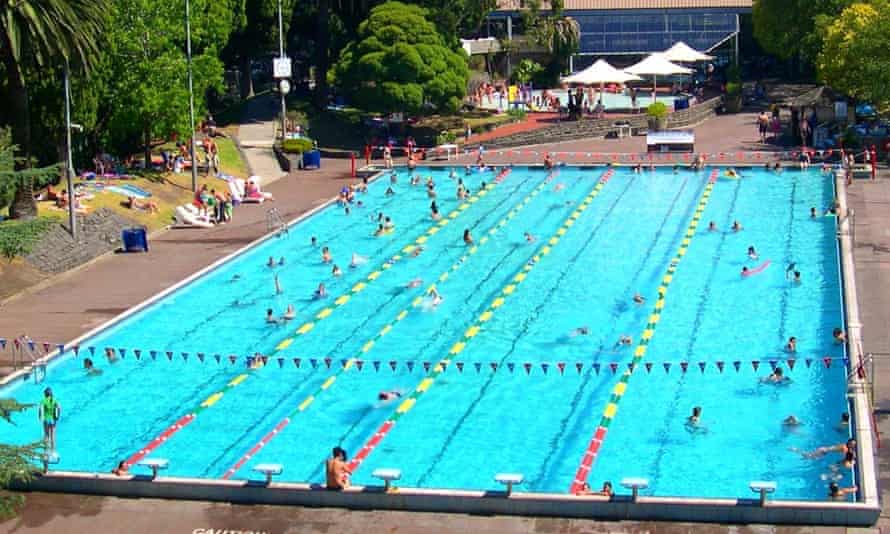 At the beginning of Bill Bryson’s travel guide Down Under, he recalls reading a history of Australian politics on the long flight from London.

“I encountered the startling fact that in 1967 the prime minister, Harold Holt, was strolling along a beach in Victoria when he plunged into the surf and vanished,” he writes. “No trace of the poor man was ever seen again. This seemed doubly astounding to me – first that Australia could just lose a prime minister (I mean, come on) and second that news of this had never reached me.”

It’s a quintessentially Australian story – as is memorializing a prime minister who presumably drowned by naming a swimming pool after him.

Commissioned in 1967 to be designed by Australian architects Kevin Borland and Daryl Jackson, the Glen Iris pool was hastily renamed after the sudden death of the local member and has since been cited as a “perhaps unintentional” example of Australian black humour. If name alone isn’t enough to earn it fourth spot, it’s now considered to be one of the finest examples of Brutalist architecture in Australia, and is listed on the Victorian Heritage Register. And it is well worth a visit in the summer or winter, with several indoor and outdoor pools, a spa and sauna, and its circular diving pool. 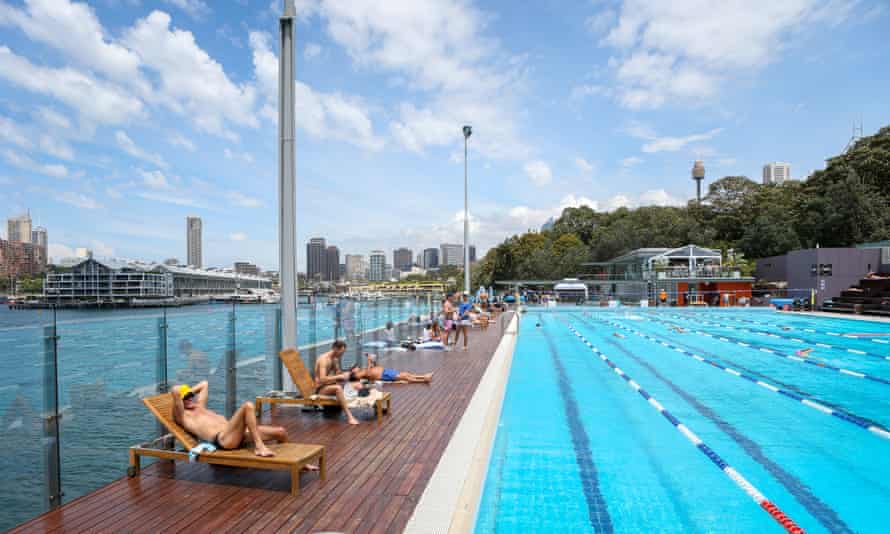 There may be no better place to enjoy the enviable views of Sydney Harbor than from Andrew (Boy) Charlton pool, set right on Woolloomooloo Bay.

Previously called the new Domain Baths, the facility has a long history. Apart from being the site of Australia’s first swimming races, it was host to Andrew “Boy” Charlton in 1924 when he swam against Arne Borg of Sweden. Some 6,000 people gathered to watch Charlton beat Borg over 402 metres, setting a new Australian record. Three decades later, the baths were refurbished and reopened under his name.

Now featuring a 50-metre outdoor saltwater pool, a 20-metre program pool and a host of sun lounges, Andrew Charlton pool is the perfect spot to well and truly settle in for the afternoon. The word “breathtaking” is thrown around a lot these days, but it may have the most beautiful poolside view in Sydney, placing it firmly at No 3. 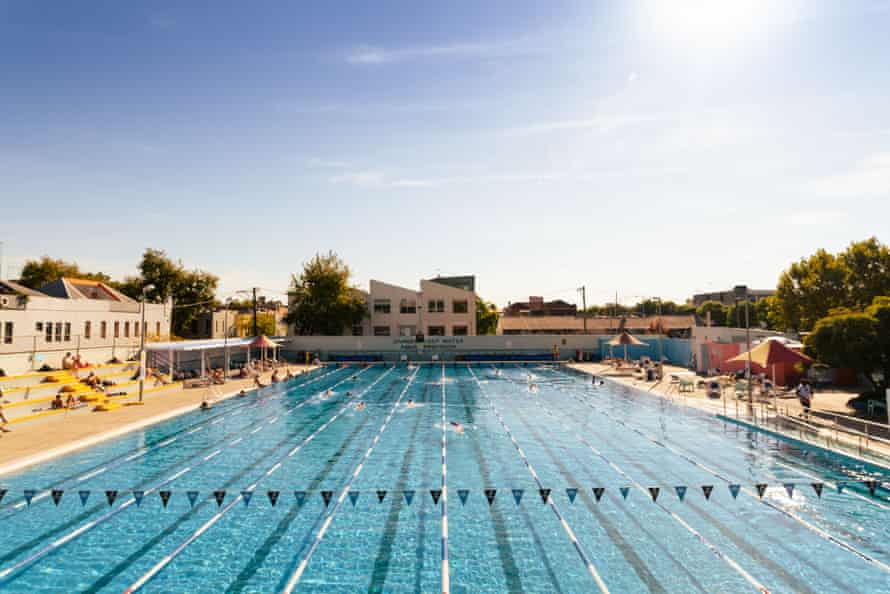 “I saw you in the lane next to me
You were doing freestyle, then you switched it around
To a little bit of backstroke
… When I came to, you and your towel were gone …”

Fitzroy swimming pool was most recently namechecked in the verses of Courtney Barnett’s Aqua Profunda!, named for the historic sign painted in the 1950s to warn Italian migrants of the “deep water”. But it’s been a cult go-to for artists and creatives for decades, featuring in Helen Garner’s quintessentially Melbourne novel Monkey Grip back in 1977.

Opened in 1908, the pool was saved from closure in the 1990s following a heated community campaign and nowadays you’ll never be a real resident of Melbourne’s inner north until you visit it; a blanket of tattooed bodies stretched out on concrete, battered Sally Rooney paperbacks in hand. Fitzroy pool is an institution and a prime spot for people watching. 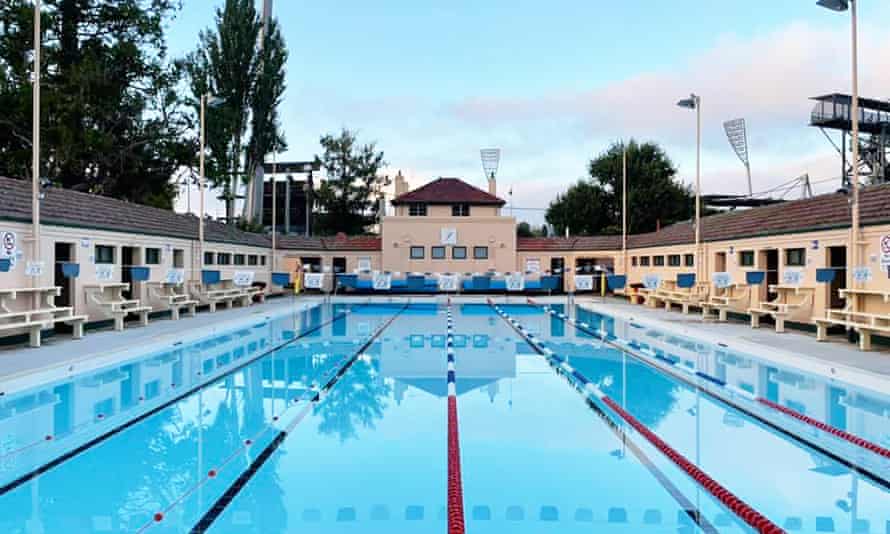 Before Manuka swimming pool became a staple of the nation’s capital, Canberrans would swim in water holes down the Molonglo, Cotter and Murrumbidgee rivers.

Then, in the summer of 1931, Canberra’s first pool (then called “The Swimming Pool”) was officially unveiled, set against the leafy Manuka Oval. Six decades later, I learned to swim in Manuka pool, passing many Sunday afternoons in my floaties.

Designed in magical art deco style by EH Henderson – also known for the capital’s National Library and beloved bus shelters across the city – Manuka swimming pool is a must-visit for any pool connoisseurs.

Featuring an outdoor 30-metre pool, toddlers’ pool and extensive grassland, Manuka pool tops the list for its beauty and grace. The heritage-listed facility still retains its period signage and deco architectural style. It was subject to a significant refresh in 2019, but the ACT government was careful to retain the original design, including specially imported tiles from the Czech Republic.