And so on Friday afternoon, in the middle of 10 inches of snow, I watched a wild 73-year-old man named Phil White perform the ceremonial ribbon-cutting to open the festival, which he launched in 2015 after finding an old ice saw the city of Newport used to harvest blocks for mazes and ice sculptures, then posting a photo of it with the question: “Does anyone want to go for a swim?”

Through the years, the festival has grown and grown. There were more than 100 entrants this year, from all over the United States and Canada, and as always the largest source of participants came from a crew that calls itself the L Street Ice Swimmers and swims year-round out of the Curley Community Center in south boston

Air temperatures hovered around 21 degrees as members of the Shark Bait Sheila’s swimming club from Newport, Vt., entered the pool for the Ceremonial Welcome to kick off the festivities. Jessica Rinaldi/Globe Staff

For generations at “The L Street Bathhouse,” as the center was once known, a group of older men called the “Brownies” have been extolling the benefits of cold water and hosting a celebrated New Year’s Day plunge into the bay. But the “Ice Swimmers” are younger, predominantly female, and interested in more than just a plunge. Elaine Howley, one of the core members, has swum both the English Channel and an Ice Mile, which must be in water below 41 degrees.

Two years ago, I tagged along with the L Street crew to do a story about the ice festival, which turned out to be, implicitly and explicitly, a recruitment seminar. “It will change your life,” the women whispered, like the drug dealers in after-school specials. And soon enough, an Ice Swimmer named Polly Madding had coaxed me into plunking down cash to reserve my spot for the next year, promising it was the best decision I’d ever made. Which is what all the cult recruiters say.

Thankfully, the 2021 event was canceled due to COVID, but the relief was short-lived when the organizers announced they were simply rolling my money over to 2022, giving me an extra year to panic and “train.” This consisted of a dozen or so cold ocean soaks, but I never actually swam in winter water because for some reason my body didn’t want to do that.

Now, two years later, the sight of the pool again sent my mind racing, and I spent Friday night battling fight or flight and a crappy motel mattress. But before I could come up with a good excuse, it was Saturday morning and I was being shuffled out of a warm restaurant and onto the frozen lake, wearing a pair of Crocs with ices spikes strapped to the bottom, a bathrobe, and a trapper Has.

On the ice I met my “escort,” who walked me to the edge of the pool, where I met my “stripper” — White loves that he came up with these terms — who hustled me down to my bathing suit. The next thing I knew, I was stepping down stairs into the water for a 25-meter race and the sharpest pain my body had ever felt all at once.

Volunteers affectionally known as “hookers,” carrying a large hook to fish out a swimmer in case they became distressed, walked alongside a competitor in the 100-meter freestyle race. Jessica Rinaldi/Globe Staff

The veterans had warned that this water would feel significantly colder than the ocean, and they were the people who would know. It turns out this was a gross understatement. It was ineffable, colder than anything I had imagined, and it squeezed my breath away with such force it felt like it would never give it back. I’m not sure I heard “Go” before I took off for the other end, instinctively employing a stroke swimmers call “the Tarzan,” a freestyle stroke but without putting your face in the water, because there was no way I was doing that.

I’m not a great swimmer, and this was an untimed “fun” race to start the meet, but I’m pretty sure I set a world record for 25 meters. My “hooker” — a man who walked alongside me with a long snare pole, lest I go under — had to hustle to keep up. Nancy Riege of Greensboro, Vt., stood on a towel inside a laundry basket to dry her feet before slipping her boots back on after swimming.Jessica Rinaldi/Globe Staff

When I reached the other end of the pool, my feet were not there to celebrate the moment, sadly, as they had frozen off, which made it tricky to get out of the pool and back into my Crocs. As I was putting my robe on, someone asked me how it went.

“I don’t know,” came my honest reply as my “escort” threw his arm around me and propped me up like a stumbling drunk until I hobbled back to the warming room in the marina next door.

Inside, a woman offered me buckets of room-temperature water for my feet, and pulled a pair of socks filled with rice from a microwave, wrapping one around my neck and placing the other in my hands. It was probably in there that I breathed again.

Ninety minutes later, I was pacing around in the restaurant, awash in emotion — a huge high, followed by a strange internal quiet — when I felt my heart flutter a bit. Then it happened a few more times, and I felt a pressure in my chest like I had to let out a giant burp.

I diagnosed it as anxiety, which seemed like a perfectly sane reaction to the fact that I was about to repeat the horror two more times: a timed 25, then a 50 meter. I scratched the 25 with no regrets, since I’d basically done that, but I had been staring down the 50 for months, telling myself I would have the courage not only to go back in the pool, but to reach the end of the pool and then turn around.

Ultimately, I made an adult decision, which is unlike me, and decided that a bruised ego felt better than cardiac arrest, so I called it.

Turns out I was wrong about what felt worse, and after another restless night in the motel, I begged into the 100 meters on Sunday morning.

My brain essentially shut down after I got the okay from the organizers, and didn’t really reboot until I’d finished the first 25 and made the turn at the wall, at which point I ran out of Tarzans and oxygen, simultaneously. I downshifted to the breast stroke to try to get a breath in, and could sense the safety crews on the ice around me shift into high alert as I limped through the second 25 meters. Fifty was going to be it for me. Fifty was enough, right? 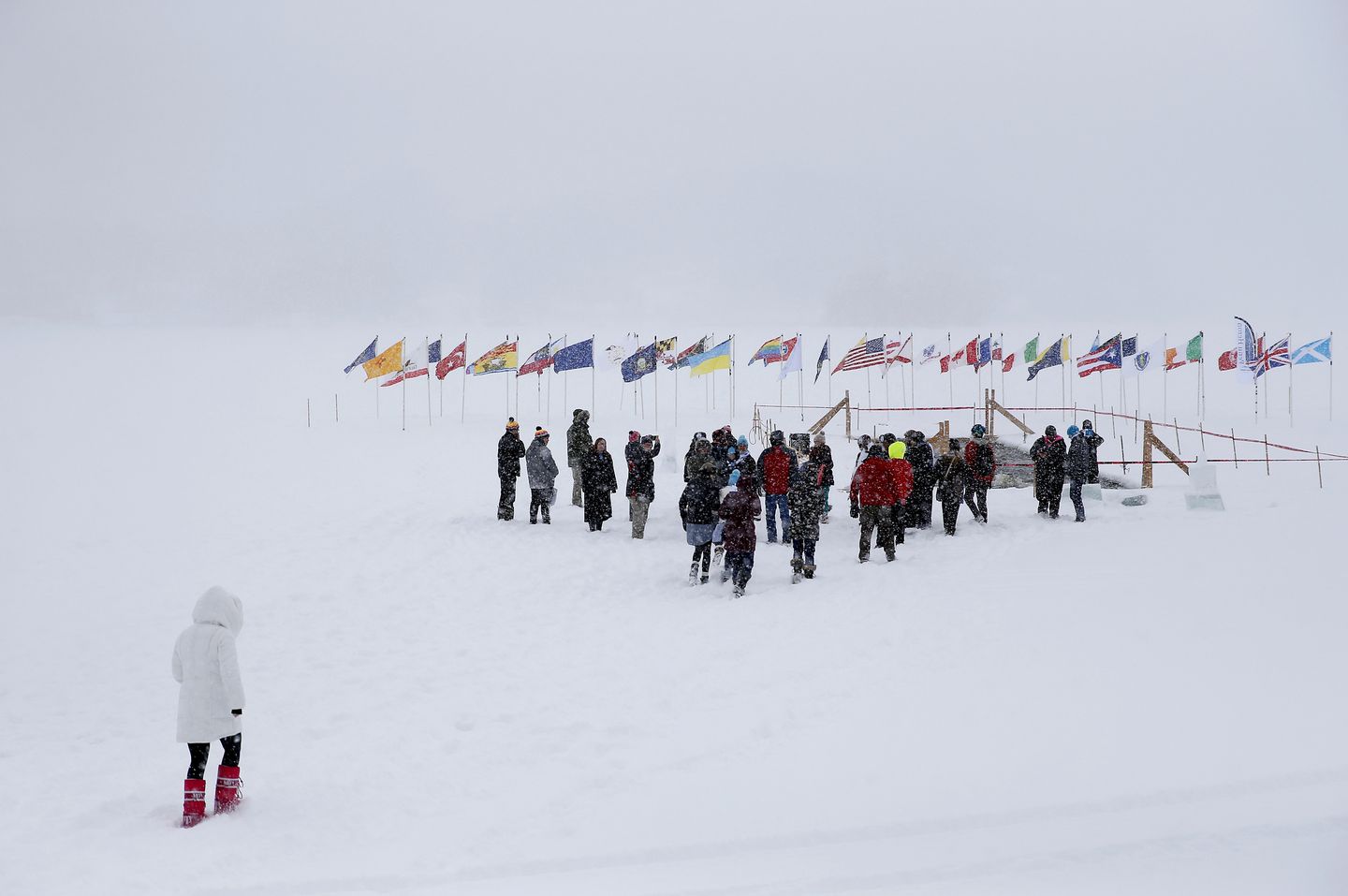 People walked out onto the snow-covered ice of Lake Memphremagog toward the two-lane Olympic-sized swimming pool that had been carved out of the ice.Jessica Rinaldi/Globe Staff

When I got to the warming room, I sat down next to a woman from Belfast, Maine, named Penny Armstrong. She was 76, had completed the 100 in the heat before me, and seemed to sense that I was thinking about leaving the cult, because she started right in.

“It’s about feeling what you feel right now,” she said, like a drug dealer in an after-school special.

That was a few days ago, and I still can’t quite describe what I felt in that moment. Even worse, I can’t explain why I have a strong desire to do it again. 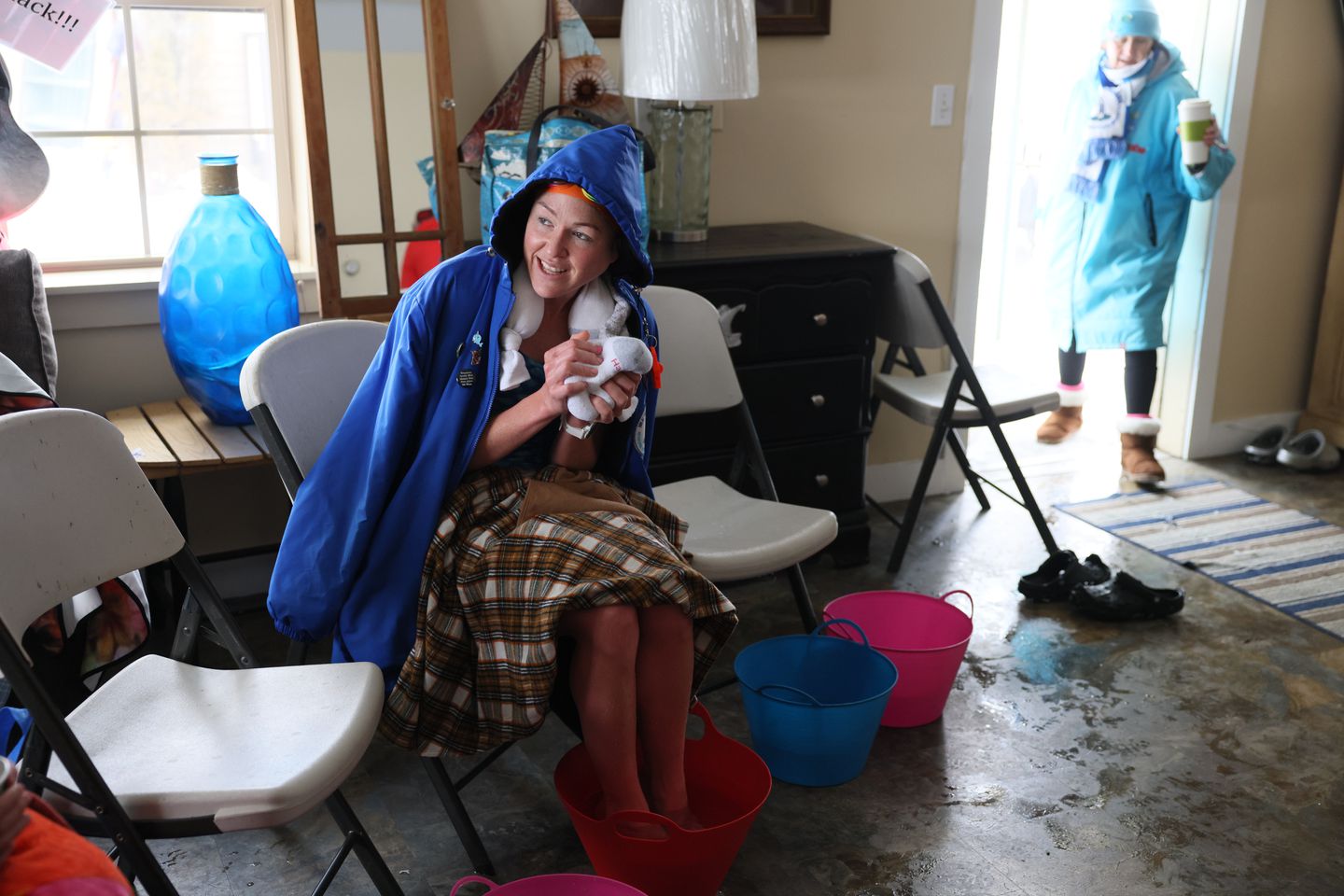 A swimmer clutched a sock filled with rice that was warmed in the microwave to try and warm her hands as she sat with her feet in a lukewarm bucket of water.Jessica Rinaldi/Globe Staff 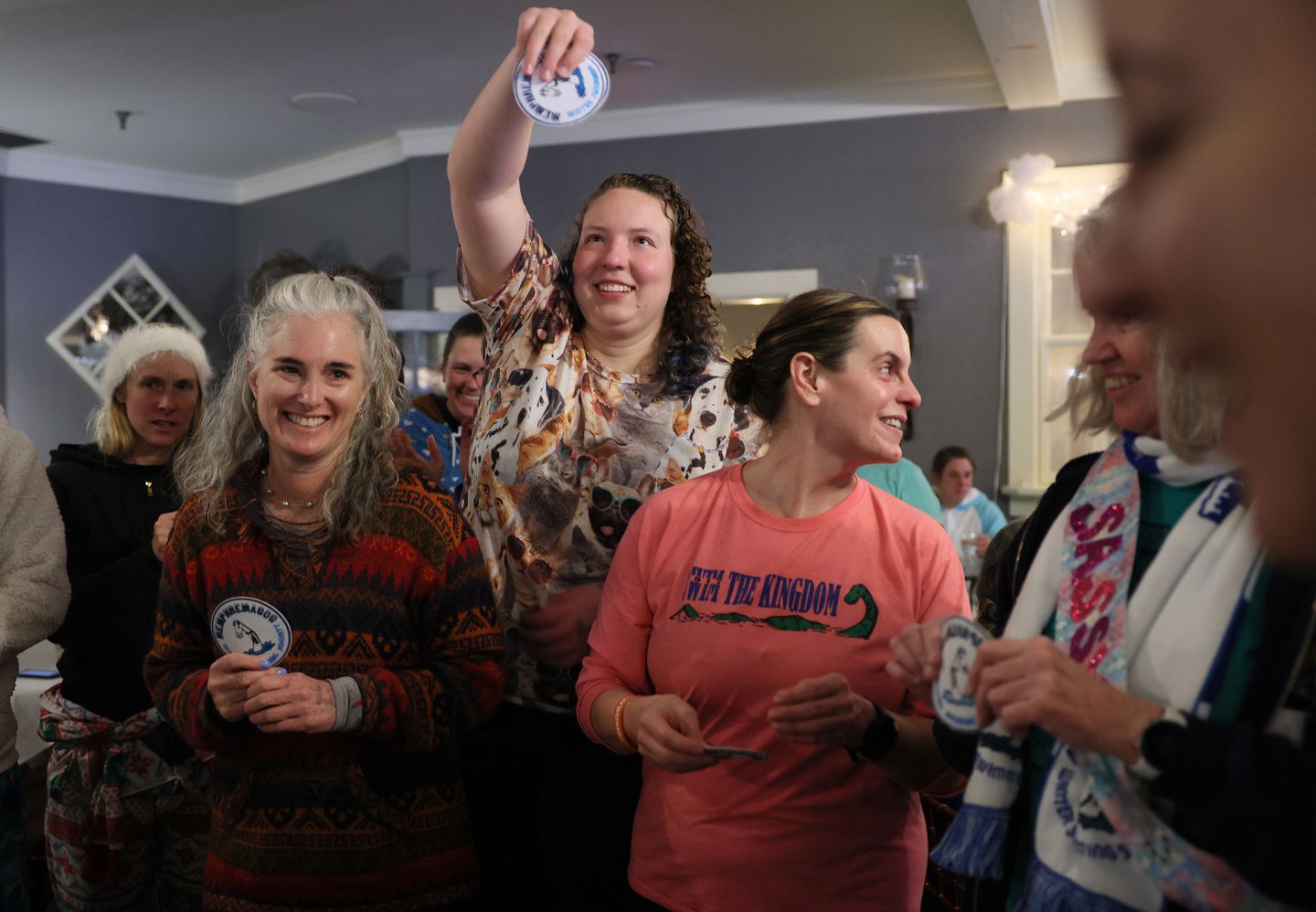 “Virgins” who competed in their first Memphremagog Winter Swim received patches to honor their achievement during an awards banquet held on the first night of the festival.Jessica Rinaldi/Globe Staff