A run-down former swimming pool and public hall that has been decaying for years is to be restored after a long-planned restoration was finally agreed upon.

It won’t be a swimming pool though, as it’s being restored and converted into an independent cinema, to be known as the Ladywell Cinema. The restoration project will be led by Guildmore, in partnership with an independent cinema operator, and subject to planning permission, work will begin next year, with the cinema due to open to the public in 2024.

The Playtower originally opened in 1884 as a swimming pool and public hall and, despite closing to the public in 2004, and having suffered from some fire in 2006, the Grade II listed building remains a feature of the neighborhood. Over the last few years, the Council has been developing plans to bring the building back into public use and safeguard its future.

The intention is to bring the Playtower back into public use (estimated cost in excess of £7 million) by delivering a mixed-use scheme comprising a cinema, associated bar/restaurant, and new homes.

The location is ideal, being a short walk from Ladywell station and Lewisham town centre.

While the original restoration plans were delayed as a result of the pandemic, an agreement has now been finalized with Guildmore to progress the project. After the previous cinema operator, Curzon had to withdraw from the project due to the impact of the pandemic, an independent operator has been found to run the new Ladywell Cinema.

There are going concerns that further delays to the restoration will cause more damage to the already badly decaying building, and push up the cost of the eventual works. The cost of the restoration has already risen sharply, from an original estimate of £4.5 million to the £7 million it’s expected to cost now. That also means that original plans for 21 flats in the new homes had to be increased to a likely 33 flats to cover the extra costs.

Lyn Goleby, of The Ladywell Cinema, said: “I’m pleased to be working with Guildmore to help them bring a cinema to Ladywell. This project has been long in the making and I hope it will make an important contribution to the economy and liveliness of the area. It is very exciting to be working on bringing back such a beautiful building to a vibrant new use and I’ll look forward to working with the local community.” 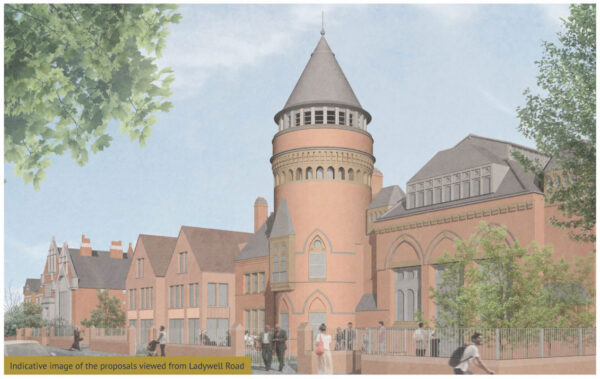