Suzanne White, 58, longed for a swimming pool. Her husband, Mark White, 60, wanted a music studio and a space for a workshop. They both wanted to host more parties.

After living in a 2,800-square-foot ranch house with four bedrooms and two bathrooms for 17 years in East Memphis, Tenn., where they raised four children, the couple sold it for $250,000 in January 2021. Two months earlier, they had paid $417,000 for a much bigger house on an acre of land about 10 miles away in Cordova.

Suzanne and Mark White upsized to a larger house in Cordova, Tenn.

“When I would hear about empty-nesters moving to bigger homes, I thought it was crazy. But now I understand,” says Ms. White.

The typical story line is that when people get older and their children leave home, they downsize to a smaller house. But for many empty-nesters, later in life is a prime time to upsize. An analysis by down payment assistance provider Home.LLC looked at urban neighborhoods with a minimum population of 500, using the median size of homes listed as an indicator of demand. Neighborhoods in which a majority of its residents are 65 and older have seen the biggest increase in the size of homes demanded over the past few years. The study found that neighborhoods that have seen a significant influx of older homeowners have also seen a large rise in the size of homes demanded, says the company’s CEO Nik Shah.

Before they upsized to this home, the Whites lived about 10 miles away in a 2,800-square-foot ranch-style house where they raised their children.

“When I would hear about empty nesters moving to bigger homes, I thought it was crazy. But now I understand,” says Ms. White.

Real-estate agents say their older clients tell them they have the resources to spend on a larger home now since they are done pouring all their earnings into raising children. They also say they don’t have to worry about the quality of the school district anymore, which means they have more flexibility and can get more room for their money. Some buyers start out wanting to downsize but change their minds when they can’t find a smaller house that is at the level of quality they are seeking. Others want room for a live-in caretaker, should that become necessary.

Dean Jones, owner of Realogics Sotheby’s International Realty in Seattle, says there is also the “grandchild trap” scenario: buying a larger estate with attractions to entice grown children and grandchildren to visit. For many buyers, the pandemic magnified the importance of having room for extended family. “People got really lonely in 2020,” says Carolyn Joy, an agent with the Tishelman Joy Team at Houlihan Lawrence.

Russell Beyer, 67, the chief financial officer of a biotech company, and Lizzie Padro, 62, a real-estate agent, lived in the same 3,400-square-foot house in Miami for 20 years. Then, this past November, they bought a roughly 5,000-square-foot house a five-minute walk away. Both houses have five bedrooms, but the additional square footage means larger rooms and bathrooms. “There’s just so much more space and privacy,” says Mr. Beyer.

Russell Beyer, 67, the chief financial officer of a biotech company, and Lizzie Padro, 62, a real-estate agent, bought a new house this past November about a five-minute walk from their old house in Miami.

As a retiree, is upsizing or downsizing more appealing to you?

This helped convince one of their three grown daughters, Danielle Beyer, 38, and her husband, who live in New Jersey, to spend a month there, along with their puppy. “It makes it much easier for us to stay,” says Ms. Beyer. She says they used to just come down for a weekend at a time. “You don’t want to intrude, to feel like you’re in someone else’s space.”

Another daughter, who is 27, and her boyfriend, now live full time with the Beyers, while their grandchildren from their third daughter sleep over with their friends multiple times a week. The Beyers sold their smaller house for $1.675 million and bought the bigger new house for $1.85 million, making their new house cheaper for them per square foot.

Both houses have five bedrooms, but the additional square footage means larger rooms and bathrooms.

The living room opens out to the patio.

The swimming pool and deck.

In July 2020, Michael Verlander, 78, who owns a vineyard, and his wife, Janet Verlander, 69, moved from a 3,000-square-foot craftsman on a 9,000-square-foot lot near the center of Healdsburg, Calif., to an ultracontemporary house about twice that size, with 26-foot-high ceilings, on 15 acres about 4 miles away.

They had been living in the smaller home since the house where they raised their three children burned down in 2017. “It wasn’t the house we wanted. It’s what we needed at the time. Now we have the house we want,” says Mr. Verlander. They designed their new home, which cost around $4 million to build, to look like a cluster of farm buildings, with wide doors and a place where a potential caregiver could live. There is a guesthouse and an oversize garage with a room where Mr. Verlander makes his own balsamic vinegar. 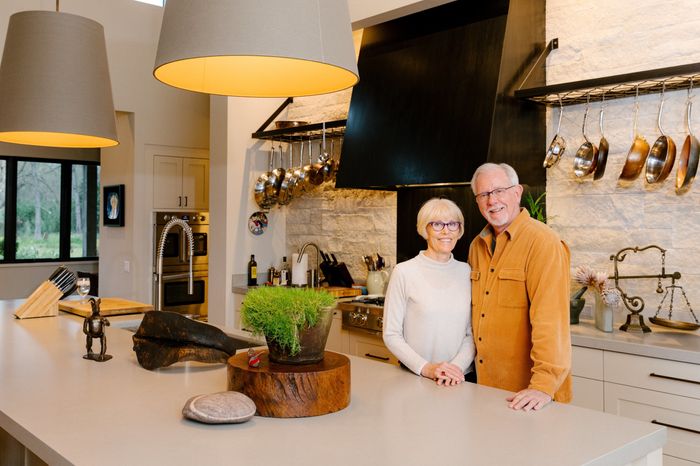 Michael and Janet Verlander at the home they built in Healdsburg, Calif.

It took very little time for Tom Willingham to realize how much he disliked living in a small space. The 73-year-old retired private investigator and his wife, Jean, sold their 4,500-square-foot house on 3 acres in Bedford, N.Y., in 2016 for $1.65 million after living there for 17 years and bought a two-bedroom, 1,600-square-foot condo for $950,000 in White Plains, N.Y., where he was still working at the time. He thought it might be OK, since the couple also owns a house in Calistoga, Calif., but Mr. Willingham says he had a visceral reaction. “Living in the small space wasn’t for us. I knew it the moment I got there,” he says.

The Bedford house had been the center of everything—their children and grandchildren would come swim and stay over. That stopped when they moved to the condo. “I felt like I was losing them,” says Mr. Willingham. “We wound up being really isolated. It was terrible.”

Michael and Janet Verlander’s home is on 15 acres about 4 miles outside the center of Healdsburg, Calif.

They designed their new home, which cost around $4 million to build, to look like a cluster of farm buildings, with wide doors and a place where a potential caregiver could live.

The bar is made from walnut wood from their old property.

Michael and Janet Verlander, with dog Roameo, on a wooden walkway that leads to Dry Creek.

This past August, the couple bought a four-bedroom, five-bathroom, 3,225-square-foot historic carriage house with a loft-like living area, large windows and a landscaped grounds house for $2 million in Irvington, N.Y. They have filed for permits to renovate it to add 1,500 square feet by putting in a main bedroom on the first floor.

who is 66 years old and has been retired for more than seven years, moved last August from a 3,700-square-foot house in San Diego to a two-bedroom apartment in Nyack, N.Y., to be closer to his son and grandson. Mr. Carter, who is divorced, initially thought he would want a home under 3,000 square feet, but quickly discovered that despite his budget of around $1.3 million, he couldn’t find something that size with everything he wanted: three bedrooms so he could have a guest room and an office, a place for gym equipment, a rec room that would hold a pool table, and a yard big enough for his grandson to play.

“I’m not willing to give all I want up,” he says. His budget hasn’t changed, but finding something larger means he might have to look at a wider geographic range—farther north, in Westchester County. “It’s been tough living in a small apartment. It’s reinforcing my decision to buy a bigger house again.”

At the moment, Deborah Watkins, who is a 64-year-old homemaker, is living in her dream community of Palmetto Bluffs in Bluffton, S.C. However, the two-bedroom, two-bathroom, 1,400-square-foot house she and her husband, Lee Watkins, bought for $820,000 last April is much too small. They are living in what she calls “the little house” while they build their new 4,000-square-foot home in the same development. The new house will have a swimming pool, walk-in closets, a walk-in pantry, a writing room with stationery and stamps, and four bedrooms and four bathrooms.

“I wanted this to feel like my forever house. I’ll never do this again. My next move is going to be to heaven,” she says.

Write to Nancy Keates at Nancy.Keates@wsj.com